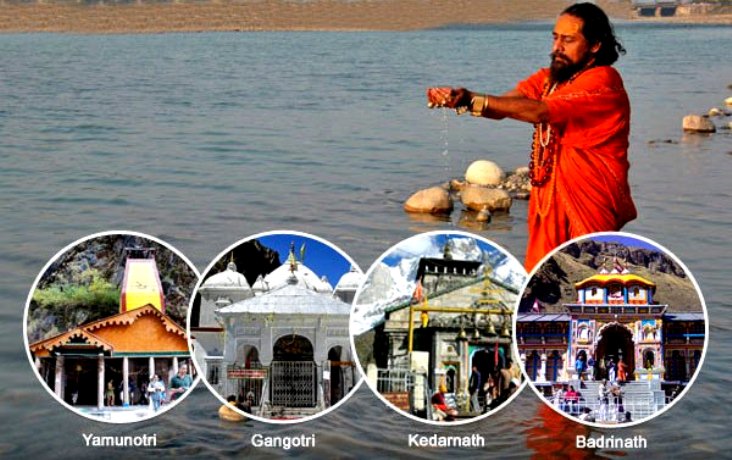 Char Dham is referred to the four Hindu religious sites in Uttarakhand state of India. These are Yamunotri, Gangotri, Badrinath and Kedarnath. Nestled in the lap of majestic Himalayas, these four sites are the epicenter of religious activity in north India. Traditionally, the Chardham Yatra is undertaken from the west to the east. Thus, the yatra starts from Yamunotri, then proceeding to Gangotri and finally to Kedarnath and Badrinath.

Amongst the four Char Dham, Yamunotri and Gangotri are dedicated to goddesses Yamuna and Ganga respectively. On the other hand, Kedarnath is dedicated to Lord Shiva while Badrinath is dedicated to Lord Vishnu. Moreover, people also visit Hemkund Sahib in the vicinity, which is one of the highest located religious sites in the country. Thus, pilgrims visit all these places in aspiration of washing away their sins and to attain salvation, by the blessings of the Lord.

The great Himalayas are known as abode to several Hindu Gods and in Uttarakhand, there are a number of the most sacred Hindu temples. There are four very famous temples named Yamunotri, Gangotri, Badrinath and Kedarnath which are communally known as Char Dham and the journey of these four sacred shrines is called Char Dham Package. The Char Dham Yatra of Uttarakhand is considered as one of the most propitious journey for the Hindu devotees and this yatra is done by a lot of pilgrims from all over the world. The valor of the Gods and the natural beauty of the great Himalayas are an ideal combination that enhances the religious and spiritual affection of the Char Dham Package. Kindly go through the following description of all the four sacred shrines of Char Dham Package:

Yamunotri : The westernmost shrine of Yamunotri is one of the most visited shrine in Char Dham Package which is situated near the source of the river Yamuna. The Yamunotri temple, built by King of Tehri Garhwal, Maharaja Pratap Shah, is located on the left bank of the river Yamuna. The river is considered as a divine mother and a goddess for all the Hindus and has been an eminent part in the development of the civilization in the north India.

Gangotri : Gangotri Dham is situated on the banks of river Bhagirathi at an elevation of almost 3200 m above sea level and respected as one of the most sacred and holy shrines for the Hindus. Gangotri has an important place in the Char Dham Package. The Gaumukh Glacier, known as the source of the river Ganges is situated on a trek route from Gangotri. The tourists who wish to visit Gaumukh Glacier need Government permission.

Kedarnath : Kedarnath temple considered as the holiest pilgrimage among the most worshipped pilgrimages for the Hinduism followers. There are twelve Jyotirlingas of the Lord Shiva and Kedarnath is one of those twelve Jyotirlingas, situated near the source of the river Mandakini at an elevation of 3585 m above sea level. To visit this temple there is a trek route of 14 km from Gaurikund. However, the temple can also be visited by a helicopter ride which starts from Phata. This temple is situated at the highest place of the Char Dham Package and has a very low oxygen level.

Badrinath : The most famous and the most visited dham among the Chardham is Badrinath which is also known as Badri Vishal, the fourth dham. With the Neelkanth peak in the background, it is located between Nar and Narayan peaks. Badrinath is the most venerated and the largest among the five Badris also called as the Panch Badri. Badrinath is one the Char Dham (four dhams) of India established by Adi Guru Shankracharya

After breakfast drive to Barkot via Dehradun and Mussoorie. Enroute visit Kempty Fall and others later drive straight to your Hotel for night halt.

Drive to Phool Chatti, trek start from here to Yamunotri (7kms). Either by walk or by horse or by Doli at own cost. Arr. Yamunotri, One can cook rice by packing it in a cloth and dipping it in the hot water of the hot kund. Pilgrims take this cooked rice home as "Prasad". Here near the temple "Pooja" can be offered to Divya Shila, After taking bath in Jamunabai Kund's warn water and having "Darshan" of pious "Yamunaji" returning to Hanumanchatti. Later drive back to Barkot. Overnight stay at Hotel.

We proceed to Gangotri (3048 mts), enroute we enjoy picturesque Harsil village, Bhagirathi River and the most magnificent view of the Himalayas. After Gangotri Darshan we return to Uttarkashi. overnight stay at Uttarkashi.

Early morning, after Temple Darshan trek down to Gaurikund. Later, drive to Rudraprayag via Guptkashi. Check in Hotel at Rudraprayag. Night Halt.

Early morning, pilgrims after having a bath in the Taptkund have the Darshan of Badrivishal. Brahamakamal is significant for Pinddan Shraddh of ancestors (Pitrus). There are other interesting sight seeing spot like Mana, Vyas Gufa, Maatamoorti, Charanpaduka, Bhimkund and the "Mukh" of the Saraswati River. Just within the three kms of Badrinathjee. Later drive back to Rudraprayag. Check in Hotel. Overnight stay at Rudraprayag.