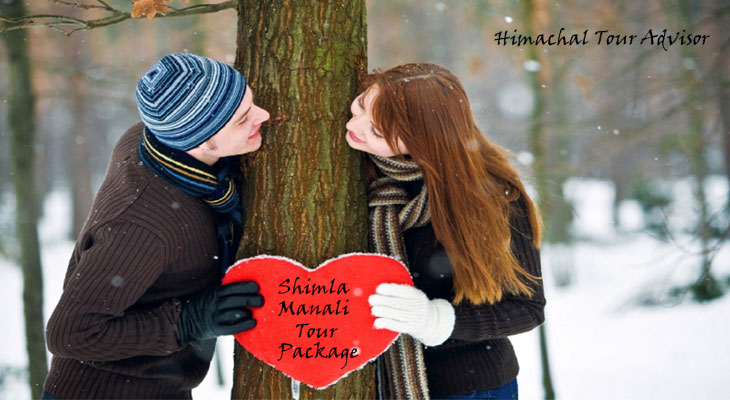 OVERVIEW- Himachal Pradesh is a beautiful honeymoon state of Northern India nestled in western Himalayas. Referred as the Magical Showcase of Nature Splendors, this is the most captivating regions of the Indian Himalayas. Abundant green grassland, wide valleys set against snow-clad mountains, crystal clear lakes, fruit laden groves, soft terraces of corn and tea makes Himachal the ultimate destination of India. Popularly known as the Devbhumi  "Land of the Gods", the state is landlocked with the Tibetan plateau to the east, Jammu and Kashmir to the north, and the Punjab to the west. The mountain altitudes ranging from 350 to 7000 meters above the sea level. Himachal Pradesh is one of the most important honeymoon destinations in India. The high hills attract the travelers from all over the world. This place has plenty of hill resorts, pilgrimage centers, adventure sports destinations and wildlife that attract a wide range of tourists.

SHIMLA- Popularly called the Queen of Hill Stations. Once the summer capital of the British in 1864 AD. Presently also it is the capital city of Himachal Pradesh. Shimla is a perfect heaven for those in search of tranquility. Nature has blessed this capital city with innumerable gifts and man has used them to make Shimla one of India's best destinations.

MANALI- Popularly called the Switzerland of India is a small hill town in the valley of Kullu. Manali is extremely popular with tourists for its lavish display of un spoilt natural beauty. Manali is mainly popular for the adventure sports like trekking, mountaineering, hiking, skiing, paragliding, kayaking and mountain biking. It is an excellent place for a holiday.

CHANDIGARH- The city was designed by the French architect Le Cor busier and is known for its modern infrastructure. Chandigarh is the first planned city of India. The city is the perfect base for exploring the surrounding region that is rich with art, history and scenic landscapes.

DAY 1: DELHI:- Arrive in Delhi and later transfer to the hotel.  After breakfast, full day city tour of New Delhi

PRESIDENT HOUSE- New Delhi, centers around the Rashtrapati Bhawan. It is architecturally a very impressive building standing at a height, flowing down as it were to India Gate. HUMAYUN TOMB- The emperor grieving widow, Haji Begum, built Humayun Tomb the first mature example of Mughal architecture in India, in 1565 AD.

LOTUS TEMPLE- The Bahai Temple, is shaped like a lotus. It is an eye-catching edifice worth exploring. Built by the Bahai community, it offers the visitor a serenity that pervades the temple and its artistic design.

Later, drive to the Queen of Hill Stations-Shimla. Transfer to the hotel.

DAY 3: SHIMLA:- After breakfast at the hotel, visit the beautiful locations of Shimla.

KUFRI- 16 kms. from Shimla and the winter sports capital. During winter, visitors have the facility for skiing. Kufri is a lovely picnic spot with a beautiful view of the hills around and the snowy peaks. There is also a zoo that delights children.

FAGU HILL- Situated on Hindustan-Tibet Road and is gifted with some enchanting views.

CHRIST CHURCH- the second oldest church in Northern India, with a very majestic appearance and inside there is a stained glass window, which represent faith, hope, charity, fortitude, patience and humility.

JAKHU HILL- the highest peak and offers a beautiful view of the town and of the snow-covered Himalayas.

In the evening you can visit the MALL ROAD, which is the main shopping center of Shimla. It is considered as the heart of the town. A vast variety of goods, handicrafts, wools and shawls, pullovers, Tibetan carpets, pickles, and squashes are here to offer. Shimla is considered the best market for handicrafts.

In the evening you can visit the MALL ROAD, which is the main shopping center of Manali. A vast variety of goods, handicrafts, wools and shawls, pullovers, and Tibetan carpet.

DAY 5: MANALI:- After breakfast, visit the Switzerland of India-Manali.

ROHTANG PASS-The highest point, 4,112m, on the Manali-Keylong road, 51-km from Manali town. Surrounded by soaring snow-capped mountains, it provides a wide panoramic view of mountains rising far above clouds, which is a sight truly breath-taking. Owing to its picturesque surroundings, this pass serves as an ideal picnic spot for tourists and people from nearby areas.

SOLANG VALLEY- It offers the view of glaciers and snow capped mountains and peaks. It has fine ski slopes.

HADIMBA TEMPLE- Hadimba or Dhungiri temple in Manali is one of the most important temples in the region. It is an ancient shrine that lies a few kilometres away from the main market of Old Manali. This temple is dedicated to Lord Manu, who is considered to the creator of human race on the earth as per the Hindu mythology.

VASHIST HOT & SULPHUR SPRINGS- Renowned for its hot springs and temples. Vashisht is a tiny village that lies towards the Rohtang Pass on the left bank of the Beas River. This place is famous for its ancient temples and hot springs. The popular hot sulphur natural springs at this place receive a lot of visitors year round as it is believed these waters can cure skin diseases.

KOTHI- a picturesque spot and an ideal resting resorts of poets, writers and the lovers of peaceful environs

Spend your time together; enjoy the snow and other adventurous games.

PINJORE GARDEN: Spread over a massive area of 100 acres and also known as Yadvinder Garden, Pinjore Garden is a spectacle to behold.

Later transfer to the hotel. Evening go out for shopping.

SUKHNA LAKE: Nestled at the foothills of Shivaliks, Sukhna Lake is a beautiful lake set amid the picturesque surroundings. Quite popular amid the locals and visitors, the place is a perfect destination for solitude seekers.

ROSE GARDEN: Rose garden, located at 16 sector of Chandigarh is a place to relax amid the nature at its best. The garden is packed with some exquisite variety of flowers making it quite popular among tourists and nature enthusiasts.

ROCK GARDEN: A symbol of imagination and novelty, this one is of its kind of garden spread across an area of 64 acres. The Rock Garden has been designed as an open air exhibition hall using urban and industrial wastes by Nek Chand, a former Road Inspector in Chandigarh.

Later in the evening drive back to Delhi.

Himachal Pradesh at a Glance

Shimla at a Glance

Manali at a Glance

Chandigarh at a Glance