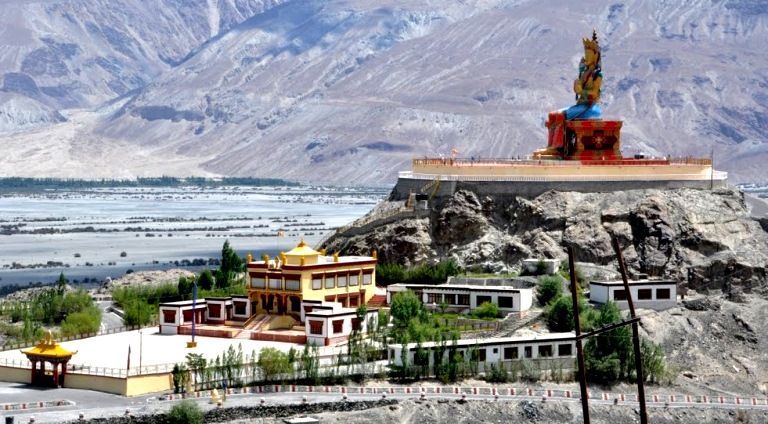 OVERVIEW- Positioned in Himalayan mountain magnificence, Ladakh is a fascinating land. The picturesque splendor of the towering mountains and immaculate valleys, tied with the vivacity of its culture, makes Ladakh one of the secluded and must-visit destinations; an exploration to feed the heart and enrich the senses. Little Tibet Tour takes the travelers to majestic monasteries like Thiksey, Shey and Hemis. The highlight of this journey is a visit to Alchi, Khardung La Pass, the highest motorable pass in the world along with visit to Pangong Tso, one of the most famous and breathtaking lakes in the world. The trail also encompasses Nubra Valley, which is a wonderful place known as the Orchard of Ladakh. Along with monasteries and palace will give you a peek into the culture and natural flavor of this incredible Himalayan terrain.

MANALI- Popularly called the Switzerland of Indiaâ€ is a small hill town in the valley of Kullu. Manali is extremely popular with tourists for its lavish display of un spoilt natural beauty. Manali is mainly popular for the adventure sports like trekking, mountaineering, hiking, skiing, paragliding, kayaking and mountain biking. It is an excellent place for a holiday.

LEH LADAKH- A land like no other with superabundance of attractions to visit and phantasmagoric and fabulous landscapes, amazing people and culture, Ladakh is truly a heaven on Earth. Bounded by two of the world's mightiest mountain ranges, the Great Himalaya and the Karakoram, it lies athwart two other, the Ladakh range and the Zanskar range.

KHARDUNG LA PASS- Best known as the gateway to the Nubra and Shyok valleys in the Ladakh, the Khardung La Pass, commonly pronounced as Khardzong La, is a very important strategic pass into the Siachen glacier and claims to be the world's highest motor able pass at an elevation of 5,602 m. The pristine air, the scenic beauty one sees all around and the feeling that you are on top of the world.

NUBRA VALLEY- Nubra Valley is known as the Orchard of Ladakh and was originally called Ldumra which meant the valley of flowers. Surrounded by snowcapped Himalayan ranges, Nubra valley lies sandwiched between Tibet and Kashmir. The view of the valley is picturesque and breathtaking. During winter, the whole valley looks like landscape of the moon (reason for calling Moonland) and in summer full of greenery.

PANGONG LAKE- The famous and sparkling blue Pangong lake is situated near Ladakh in the Himalayas, is approximately at the height of 4350 meters. This endothecia lake is 12 kilometres long and extends from India to Tibet. A unique feature of the lake is that it does not remain blue throughout the year or even the day, rather it changes colours from azure to light blue to green and grey too.

DAY 1: MANALI - KEYLONG- Today drive to Keylong (3,350m). From Manali the path leads to Rohtang Pass then you ll reach to the Gateway to Twin valleys of Lahaul and Spiti, and later through villages.

DAY 2: KEYLONG - SARCHU-Â Drive to Sarchu (4,253m) from Keylong. Later reach to the village of Gemur, famous for an ancient Buddha Gompa and further 7 km ahead is village Jispa, where the Regional Center of the Mountaineering Institute, Manali is located. From Jispa drive towards Baralacha Pass (4,891m), which is 45 km. Enroute visit the glacial lake called Suraj Tal (4802 m).

Retire for few hours to enable yourself to acclimatize with the high altitude.

HEMIS MONASTERY- Hemis Monastery is revered as the largest monastic institution in Ladakh. Hemis Monastry is the wealthiest monastery in India and famous for its rich collection of ancient remnants like the statue of Buddha made of copper, stupas made of gold and silver. Monastery also has sacred Thangkas, murals and various artifacts. The Tibetan style architecture of the monastery is very colourful and attractive. Also visit the Hemis High Altitude Wildlife Sanctuary and a number of Gompas in and around the area.

THIKSEY MONASTERY- Thikse Gompa, of the Yellow Hat (Gelugpa) sect, is around 19 kms to the East of the main city of Leh. The architecture of the largest monastery in central region of Ladakh is similar to the Potala Palace in Lhasa, Tibet. This 12-storey building complex consists of a number of things related to Buddhist art such as Thangka paintings, statues, stupas, swords, and so on. A major tourist attraction is the Maitreya temple installed in 1970. The statue of future Lord Buddha in this temple of 49 feet high, which is also the largest in the region.

STOK PALACE- Located close to the Indus River; it was built in 1825 AD by King Tsespal Tondup Namgyal. Well known for its architecture and design, beautiful gardens and amazing views, the palace presents a collection of royal attires, crown and other royal materials.

SHEY MONASTERY- It is one of the most revered Buddhist learning centers in the valley of Ladakh. The renowned monastery was built in the mid of the 17th century by King Deldon Namgyal in the memory of his late father Singay Namgyal. The Shey Monastery still holds the glimpses of the bygone rule.

KHARDUNGLA PASS- Best known as the gateway to the Nubra and Shyok valleys in the Ladakh region of Jammu and Kashmir, the Khardung La Pass, commonly pronounced as Khardzong La, is a very important strategic pass into the Siachen glacier and claims to be the world's highest motor able pass at an elevation of 5,602 m. The pristine air, the scenic beauty one sees all around and the feeling that you are on top of the world.

Later in the afternoon continue your drive to Nubra Valley. Transfer to hotel. After freshen up visit

DISKIT MONASTERY & HUNDUR MONASTERY- Both are popular Buddhist monasteries of Nubra. Also known as Diskit/ Diskit Gompa, this is the oldest and largest monastery in Nubra valley, belonging to Gelugpa (yellow hat) sect of Tibetan Buddhism. Diksit has been named as "The orchard of Ladakh". Diksit monastery also has a school which is run in collaboration with an NGO named "The Tibet support group".

MAITREYA BUDDHA- This is a 32 meter tall statue of Maitreya Buddha facing towards the Shyok river. This statue has been recently built, with 8 Kg gold which was donated by the head of Gompa and was sanctified by H.

SAMSTANLING MONASTERY- The Monastery is in Sumlur village and was founded by Lama Tsultim Nima, 140 years ago. The monastery houses 50 monks and this is the main monastery of the region.

On the way and around the monastery the landscape is enchanted with the yellow-red trees, vibrant and colourful prayer flags, berry bushes, golden-grey mountains reaching out to cuddle the pristine blue skyline.

BACTARIAN CAMEL SAFARI- They is white sand dunes where you partake in Camel Safari on double-humped camels and were the major mode of transport to travel to silk route.Â

Later drive back to Leh.

DAY 7: LEH - PANGONG LAKE - LEH- Today go on a excursion trip to Pangong Lake, which is located on Indo China Border. Enroute stop by Changla Pass (17,586 feet) which is the third highest pass of the world. Later visit the exact location of the famous movie â€œThree idiotsâ€ & enjoy outing along the banks of the lake. On a clear sunny day, you can see seven color formations in the crystal clear salt water lake. The sublime beauty, crystal waters and gentle hills of Pangong Lake are an exceptional example of the beautiful landscape of the region.

Later in the evening, travel back by car/flight towards onward destination.

Manali at a Glance

Leh Ladakh at a Glance