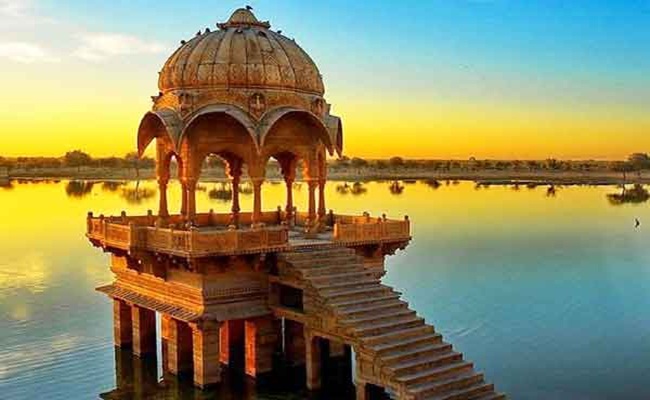 MANDAWA- Mandawa is a small town in the heart of Shekhawati region. The place is known not only for its havelis but also for its Fort Palace. The structure of the palace reminds of the cultural and social importance of this region in the past. Of the havelis, the most important are the Chokhani, Ladia, Binsidhar Newatia, and Gulab Rai Ladia Haveli.

FATEHPUR SIKRI- Once the capital of the Mughal emperor Akbar, a deserted, red sandstone city built by the Mughal Emperor Akbar in the 16th century. It is built in red sandstone, and is a beautiful blend of Hindu and Islamic architectural elements.

ORCHHA- The meaning of the place, Orchha is a hidden place and it perfectly justifies this small village hidden by the forests. Its grandeur has been captured in stone, frozen in time a rich legacy to the ages. It is a major tourist attraction of Madhya Pradesh because of the number of beautifully built palaces, temples and cenotaphs built in the 16th and 17th centuries reflecting the rich Bundela art and architecture.

Arrive in Delhi and later transfer to the hotel. After freshen up, enjoy full day city tour of Old Delhi & New Delhi visiting

PRESIDENT'S HOUSE- New Delhi, centers around the Rashtrapati Bhawan. It is architecturally a very impressive building standing at a height, flowing down as it were to India Gate.

Next morning drive towards a small town in the heart of Shekhawati Region- Mandawa. Transfer to hotel. In the evening visit

FORT PALACE- The structure of the palace reminds of the cultural and social importance of this region in the past.

CITY PALACE-In the heart of the old city is former royal residence built in a blend of the Rajasthani and Mughal styles. The palace also has an art gallery with an excellent collection of miniature paintings, carpets, royal paraphernalia and rare astronomical works in Arabic, Persian, Latin and Sanskrit, acquired by Sawai Jai Singh II to study astronomy in detail.

After breakfast visit the Agra viewing

After breakfast drive to old and beautiful town- Orchha. Transfer to hotel and after lunch visit Orchha.

JAHANGIR MAHAL- A 17th century mansion, is remarkable for its vivid and fine Indo-Islamic style of architecture.

CHHATRIS- The cluster of the Chhatris along the Kanchana Ghat of the Betwa River is one of the imposing and attractive features in Orchha. These Chhatris are the memorials of the rulers of Orchha.

ORCHHA FORT- The Fort Complex is the main attraction of Orchha, it is located on an island on the Betwa River.

Overnight at Hotel.
DAY 10: KHAJURAHO - VARANASI
After breakfast drive to the city of Varanasi situated on the west bank of the holiest of all Indian  rivers, the Ganga or Ganges. Transfer to hotel. Evening free for leisure.
Overnight at Hotel.
DAY 11: VARANASI
After breakfast go for an early morning boat cruise at the river Ganges to observe the way of life of pilgrims by the Ghats. The Ganga Ghats are the main centre of religious activities and rituals and also form one of the main attractions of Varanasi. The Alamgir Mosque, blend of Hindu and Mughal styles of architecture, is another important attraction of Varanasi.

Some of the important temples are Durga Temple, Vishwanath Temple, Sankat Mochan Temple, Tulsi Manas Temple and The Bharat Mata Temple. Other attractions of Varanasi are the Banaras Hindu Universality, the Archeological Museum and Buddhist Stupas. Evening view Aarti ceremony on the Ghats.

Later in the evening, travel back by car/flight/train towards onward destination.

Mandawa at a Glance