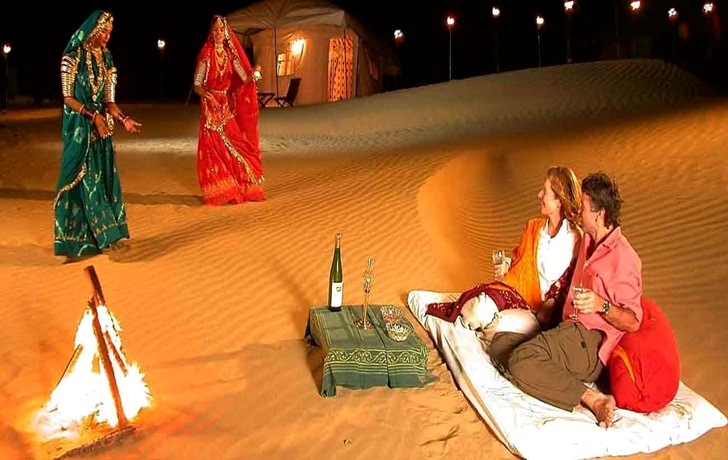 UDAIPUR- One of the most beautiful cities of Rajasthan, located on the banks of Lake Pichola, also known as a 'Jewel of Mewar'. The most romantic city of India can take the tourist into paroxysm of heaven. The center of attraction vibrates around the shimmering blue waters and the royal white marble palaces constructed with unique artistic insight.

JODHPUR- Popularly called the Blue City of Rajasthan; Jodhpur is second largest city in Rajasthan after Jaipur. It is an island of marble palaces from the desert by an immense wall, with eight gates facing different directions. Jodhpur is famous for its magnificent fort and palaces. The city is situated at the edge of the Thar Desert with Jaisalmer on its west, Bikaner on its north side.

PUSHKAR- Located 11km from Ajmer, according to Hindu mythology the town is the creation of Lord Brahma - the Creator of the Universe. A temple dedicated to Brahma has been built here. Pushkar also hosts one of the most colorful cattle fairs in the country. A very important pilgrimage spot for Hindus, Pushkar is famous for its lake.

ORCHHA- The meaning of the place, Orchha is a hidden place and it perfectly justifies this small village hidden by the forests. Its grandeur has been captured in stone, frozen in time a rich legacy to the ages. It is a major tourist attraction of Madhya Pradesh because of the number of beautifully built palaces, temples and cenotaphs built in the 16th and 17th centuries reflecting the rich Bundela art and architecture.

Arrive in Udaipur and later transfer to the hotel. Time to relax. In the evening enjoy the boat ride on the picturesque Lake Pichola.

Full day sightseeing of The City of Lakes-Udaipur.

Next morning drive to the Blue City of Rajasthan- Jodhpur. On reaching, transfer to the hotel. Later visit the city.

Drive to the holy city of Pushkar.

It is a well-known Hindu pilgrim center. The main feature of Pushkar is its lake, which according to Hindu legend was created from a lotus flower dropped by Lord Brahma. and the Brahma temple. Pushkar is better known for the cattle fair.

DAY 5: PUSHKAR - JAIPUR
Today, drive towards Jaipur- the pristine jewel in the desert sands of Rajasthan. Transfer to hotel. After lunch visit the Pink City viewing.
HAWA MAHAL- One of the most common and popular tourist attractions in Jaipur. This five-storey building was used as a veil by the royal women folk to watch the proceedings on the road below.

RANTHAMBORE FORT & JOGI MAHAL- The park got its name from the Ranthambore Fort, which sits on a rocky outcrop in the heart of the Park. The fort, which dates back to the 10th century and is probably the oldest existing fort in Rajasthan, was a vital citadel for control of Central India and particularly the Malwa plateau.

The entry point to the Ranthambore National Park goes straight to the foot of the fort and the forest rest house, Jogi Mahal. Also it has the second-largest Banyan tree in India.

After breakfast drive to old and beautiful town- Orchha. Transfer to hotel and after lunch visit Orchha.

JAHANGIR MAHAL- A 17th century mansion, is remarkable for its vivid and fine Indo-Islamic style of architecture.

CHHATRIS- The cluster of the Chhatris along the Kanchana Ghat of the Betwa River is one of the imposing and attractive features in Orchha. These Chhatris are the memorials of the rulers of Orchha.

ORCHHA FORT- The Fort Complex is the main attraction of Orchha, it is located on an island on the Betwa River.

After breakfast drive to the city of Varanasi situated on the west bank of the holiest of all Indian rivers, the Ganga or Ganges. Transfer to hotel. Evening free for leisure.

Early morning boat cruise at the river Ganges to observe the way of life of pilgrims by the Ghats. The Ganga Ghats are the main center of religious activities and rituals and also form one of the main attractions of Varanasi. The Alamgir Mosque, blend of Hindu and Mughal styles of architecture, is another important attraction of Varanasi.

Some of the important temples are Durga Temple, Vishwanath Temple, Sankat Mochan Temple, Tulsi Manas Temple and The Bharat Mata Temple. Other attractions of Varanasi are the Benaras Hindu Universality, the Archeological Museum and Buddhist Stupas. Evening view Aarti ceremony on the Ghats.

Later in the evening, travel back by car/flight/train towards onward destination.

Pushkar at a Glance