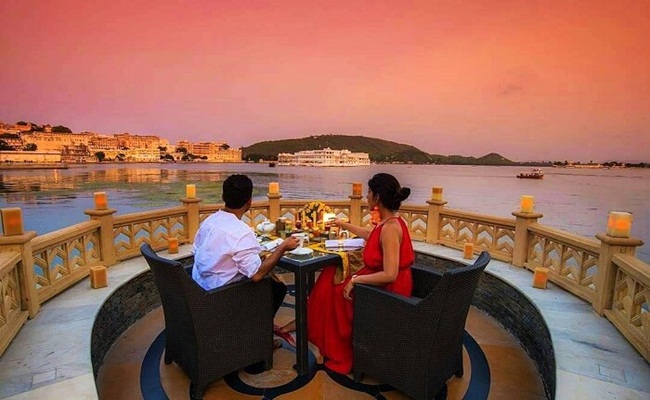 RAJASTHAN- The state of Rajasthan is associated with the astounding legends of heroism and romance still echoes from its royal fort and palaces that stands majestically on hilltop to narrate the tale of a chivalry and audacity. The magic of vibrant Rajasthan - its rich heritage, colorful culture, exciting desert safaris, shining sand-dunes, amazing variety lush forests and varied wildlife - makes it a destination nonpareil. Rajasthan is often portrayed as one vast open-air museum, with its relics so well preserved that it delights even the most skeptical traveler. Rajasthan India comprises of forts and palaces, wildlife's. All this makes Rajasthan a wonderful destination to explore. Travel Rajasthan in order to explore the exquisite craftsmanship of bygone era. Tourism in Rajasthan makes state one of the most visited state of India.
JAIPUR- Jaipur is remarkable for its marvelous architecture and town planning as it is for the lively spirit of the people who inhabit it. The city presents a unique synthesis of culture that has to be experienced in order to be appreciated. The old Jaipur painted in Pink, the lively spirit of fanfare, festivity and celebration of the people adequately match the colorful and intricately carved monuments.
MANDAWA- Mandawa is a small town in the heart of Shekhawati region. The place is known not only for its havelis but also for its Fort Palace. The structure of the palace reminds of the cultural and social importance of this region in the past. Of the havelis, the most important are the Chokhani, Ladia, Binsidhar Newatia, and Gulab Rai Ladia Haveli.
BIKANER- Located in the north western part of the state, Bikaner has a rich historical tradition and thousands of tourists from all over the year come here to get a feel of the rich tradition and culture. Bikaner attracts thousands of travelers for its rich historical tradition and culture. The city consists of beautiful forts, castles, religious shrines and other historical monuments.
JODHPUR- Popularly called the Blue City of Rajasthan; Jodhpur is second largest city in Rajasthan after Jaipur. It is an island of marble palaces from the desert by an immense wall, with eight gates facing different directions. Jodhpur is famous for its magnificent fort and palaces. The city is situated at the edge of the Thar Desert with Jaisalmer on its west, Bikaner on its north side.
JAISALMER- Popularly known as the Desert City of Rajasthan, and is a paradise of the desert kingdom. It sets a image of deserted land with camel swiftly moving on the golden sands. The city is almost enticing and for domestic travelers as it is to foreign tourists. Standing in pride with its colossal forts, palaces and havelis, Jaisalmer showcases the artistic sense of the Rajput kings.
UDAIPUR- One of the most beautiful cities of Rajasthan, located on the banks of Lake Pichola, also known as a 'Jewel of Mewar'. The most romantic city of India can take the tourist into paroxysm of heaven. The center of attraction vibrates around the shimmering blue waters and the royal white marble palaces constructed with unique artistic insight.
MOUNT ABU- A lush green summer resort and the only hill station in Rajasthan. Mount Abu has a somewhat steep incline, with ravines cut into its sides, filled with trees, bushes and beautiful birds. It is a detached hill, and on the plateau on the summit is granite rocks of fantastic shapes, the space between them covered with greenery.

Arrive in Jaipur and later transfer to the hotel. Time to relax.

In the evening you can visit Chowki Dhani- well-recreated Rajasthani village. You get an evening's entertainment and rich traditional dinner. You can view Rajasthani dances, potters, cooks, go on animal rides, and visit palm readers etc.

Return back to Jaipur and overnight at hotel.

Next morning drive towards a small town in the heart of Shekhawati Region- Mandawa. Transfer to hotel. In the evening visit

FORT PALACE- The structure of the palace reminds of the cultural and social importance of this region in the past.

Next morning drive to the imposing walled city of Bikaner; transfer to hotel and after lunch visit Bikaner

LALGARH PALACE- The spectacular Palace is an outstanding architectural marvel that enchants you with a magical fusion Rajputana, European and Mughal building styles. Stone crafted pillars, Italian colonnades, spacious lounges, regal halls and profusely carved fire places at the imposing Lalgarh Palace in Bikaner transport you back in time to an incomparably lavish royal era.

GAJNER PALACE- This red sandstone Palace lies ensconced in the midst of wooded grounds and is a delightful palatial home that has been converted into a heritage hotel. Delicately carved columns, sculpted pillars and Jharokha windows add to the quiet class of this heritage palace in Bikaner, Rajasthan. Set on the banks of a serene lake the Gajner Palace is a glittering jewel on the Bikaner crown.

SHIV BARI TEMPLE- Constructed by Maharaja Doongar Singh Ji, the Shiv Bari Temple India is a virtual museum of miniature paintings that are delicate yet colorful representations of ethnic Bikaner traditions and patterns.

CAMEL BREEDING FARM- Popularly referred to as the Government Camel Breeding Farm, the National Research Center on Camel breeds the best camels in Bikaner and conducts research work related to "the ship of the desert."

Next morning drive to the Blue City of Rajasthan- Jodhpur. Transfer to hotel and after lunch visit Jodhpur.

Today continue your drive to the desert town of Jaisalmer. Transfer to hotel and in the evening visit.

SAM SAND DUNES- Sam Sand dunes are the major attractions of Jaislamer. It is 3 kms long and 1 km wide and is half a kilometer high. The Sam sand dunes are unreliable and they are picturesque. Sam Sand dunes are just the place to surf the golden sands of Rajasthan through a safari.

Take on a full day city tour of Jaisalmer.

JAISALMER FORT- This fort is the second oldest fort of Rajasthan. A sight to behold, this living fort is one of the marvels of Rajasthani Architecture, especially of the stone carver's art.

HAVELIES- Evoking a vision of chivalry and valor, wealthy merchants built these havelies. Famous for their intricately- carved facades, the workmanship of Jaisalmer's Havelies present a beautiful amalgam of Rajput architecture and Islamic art. Some of the famous havelies of Jaisalmer are Salim-Singh-ki-Haveli, Patwon-ki-Haveli, and Nathmal-ki-Haveli.

GADISSAR LAKE- The origin of this artificial water tank dates back to 1156 AD. Surrounded by small temples and shrines, it also gives a view of the exquisite archway, Teelonki Pol - one of the main entrances to the lake and the city.

Today drive to the only hill station of Rajasthan- Mount Abu. Transfer to hotel. Evening free for leisure.

Take on a full day city tour of Mount Abu.

DILWARA JAIN TEMPLE- Dilwara Temple is a group of remarkable Jain temples. Among the finest examples of these are two temples in which the art of carving marble has reached unsurpassed heights.

NAKKI LAKE- Nakki Lake is virtually located in the heart of Mount Abu and is a big attraction with tourists. The lake takes its name from the legend that it was scooped out by a god, using only his nails, or nakh.

GURU SHIKHAR PEAK- The peak is the highest point over there and on top of it is Dattatreya, a shrine and a temple.

Next morning drive towards Udaipur. Transfer to hotel, in the evening enjoy the boat ride on the picturesque Lake Pichola.

Take on a full day city tour of The City of Lakes- Udaipur.

Later in the day, transfer to Udaipur Airport/Station to catch your flight/train towards onward destination.

Mandawa at a Glance

Bikaner at a Glance

Jaisalmer at a Glance

Mount Abu at a Glance