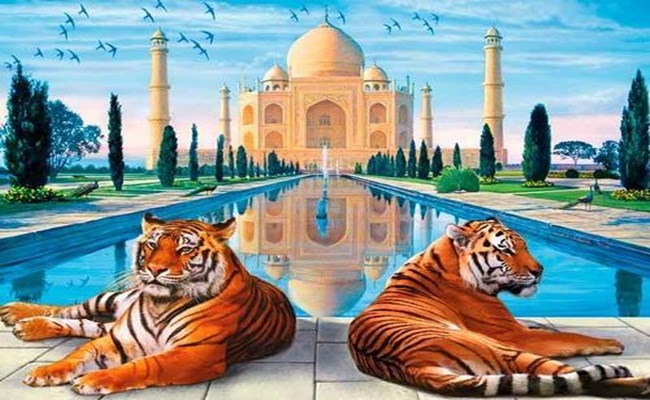 SARISKA- This is Alwar's own garden of paradise. Set in a wooded valley surrounded by barren hills, it is one of the most picturesque Tiger Reserves of Rajasthan. Sariska was declared a sanctuary in 1955, though it became the more distinguished Tiger Reserve in 1979. Three years later it became a National Park.

Arrive in Delhi and later transfer to the hotel. After freshen up, enjoy full day city tour of Old Delhi & New Delhi visiting.

PRESIDENT'S HOUSE- New Delhi, centers around the Rashtrapati Bhawan. It is architecturally a very impressive building standing at a height, flowing down as it were to India Gate.

Next morning drive to Sariska, the city has a rich natural heritage with some beautiful lakes and picturesque valleys thickly wooded in parts.

SARISKA WILDLIFE SANCTUARY- The reserve is under the "Project Tiger". The forest cover is mostly of the dry deciduous type with Dhok, Khair, Tendu, Ber, Surwal and Goria.

The park also has good populations of Nilgai, Sambar and Chital. In the evenings, Indian Porcupine, Striped Hyena, Indian Palm Civet and even Leopard are sometimes seen. The Tigers of Sariska are largely nocturnal and are not as easily seen as those of Ranthambore.

RANTHAMBORE FORT & JOGI MAHAL- The park got its name from the Ranthambore Fort, which sits on a rocky outcrop in the heart of the Park. The fort, which dates back to the 10th century and is probably the oldest existing fort in Rajasthan, was a vital citadel for control of Central India and particularly the Malwa plateau.

The entry point to the Ranthambore National Park goes straight to the foot of the fort and the forest rest house, Jogi Mahal. Also it has the second-largest Banyan tree in India.

Drive towards The Land of culture and heritage- Agra enroute visiting FathepurSikri.

After breakfast, travel back to Delhi to catch your flight/train towards onward destination

Sariska at a Glance