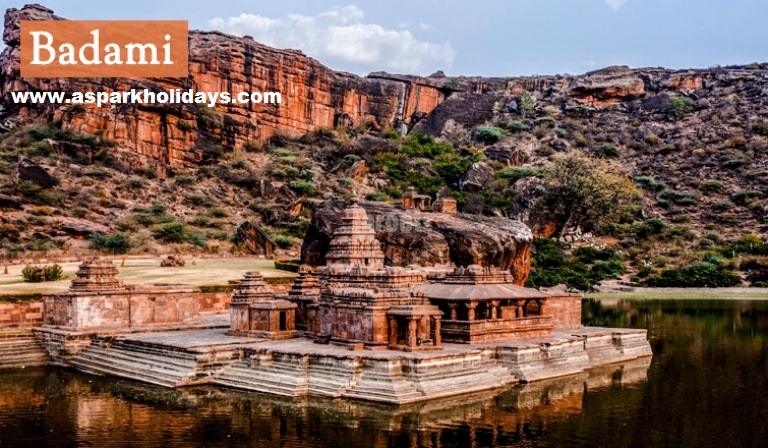 About Badami
Badami is an interesting place to visit in Karnataka, situated about 499 kms from Bangalore. Badami is picturesquely situated at the mouth of a ravine between two rocky hills, at an altitude of 177 metres. Badami was founded by Pulakesin I and was the capital of the Chalukyas, reflecting the art of Chalukyas in style, grace and strength. One of the main highlights of this city is the natural gorge embellished with temples and gateways, leading to the city. Badami is famous for its artificial lake, ancient temples and museum. The main attraction of Badami are the caves which are carved out of sand stone on the top of the hill and belongs to the 6th century AD. The temperature in Badami ranges from 10 to 15 degree Celsius in winters and 23 to 38 degree Celsius in summers. Badami can be visited throughout the year except in summers from the month of April to June.

Tourist Attractions in Badami- The main tourist attraction in Badami are the four cave temples. Besides this, the museum, ancient Jain temples and artificial lake are also there in Badami.

Cave Temple 1- The first cave temple belongs to 578 AD and was the first cave temple to be carved. One has to climb up 40 odd steps to reach the colonnaded verandah, a hall with numerous pillars and a square shaped sanctum hollowed in the control back wall. The column shafts are masterfully crafted. The dwarfs decorate the front of the verandah with a Nandi bull on the left and an 18-armed Natraja or Shiva with 81 dance poses on the right. On the ceiling one can also see the paintings of Shiva and his consort Parvati and a coiled serpent. There is also an image of Vishnu in the vestibule and the goddess Durga beating the demon Mahishasure on the farthest wall.

Cave Temple 3:- The third cave temple is the largest and most ornamental temple, dedicated to Vishnu. This cave temple belongs to 578 AD and has a double row of pillars with carvings belonging to both Shaivite and Vaishnavite themes. The facade of the cave is nearly 70 feet wide, and on the plinth one can see the carvings of ganas. The sheer artistry and sculptural genius makes this cave the highlight of Deccan art. This cave temple gives a virtual insight into the art and culture of the 6th century like costumes, jewelry, hairstyle, lifestyle etc. Some of the splendid carvings of the Lord Vishnu in various forms like Narasimha (half-man-half-lion), Harihara (half Shiva and half Vishnu) and Narayana sitting as well as reclining on the snake 'Shesh' or 'Anantha' can also be seen in this cave. There are also some paintings on the ceiling and wonderful bracket figures on the piers.

Cave Temple 4- The fourth cave temple is the Jain temple. The construction of this cave was started in the 6th century and was completed after nearly 100 years. The carvings of the Tirthankara Parshavnatha with a serpent at his feet and Lord Mahavira in a sitting posture can also be seen in this temple.

Badami Fort- Badami Fort is situated on top of the hill and large granaries, a treasury, watch tower and impressive temples are enclosed the fort. The famous Mallegitti Shivalaya temple, the oldest temple, is built out of stone and finely joined without mortar, with a Dravidians tower on the top of the hill.

Mahkuta (5 kms.) - The Shaiva pilgrim centre set amidst lush surroundings is famous for the Mahakuteshwara temple dedicated to Lord Shiva. The courtyard of the shrine has 15 small temples with exquisitely carved sculptures and a natural spring pond.

Banashankari Temple (5 kms.)- It is one of the most ancient temples of Karnataka. Harishchandra Teertha, a large sacred pond in front of the shrine is a fine example of Chalukyan temple architecture.

Temple of Durga- This 7th century shrine is the largest and finest monument of Aivalli. Its semi  circular apse surrounded by an open colonnade and remains of curvilinear sikhara are quite unique. The main figures at the shrine are chamunda Devi trampling the buffalo demon, narasimha and aspects of Lord Shiva. One can see the first model of intricately carved Hoysala pillar at the shrine. There is a small museum behind the Durga temple, exhibiting works of Chalukyan sculptors.

How to reach Badami

By Air:- The nearest airport is located at Belgaum, about 192 kms. from Bangalore and also connected with Mumbai.

By Rail:- Badami is located on the Bubli-Sholapur metre gauge line and is connected to Bangalore, Bijapur and Bagalkot.

By Road:- Badami is connected by road to all nearby cities like Pattadakal, Aihole, Hampi, Bijapur, Panaji (Goa) and Bangalore.