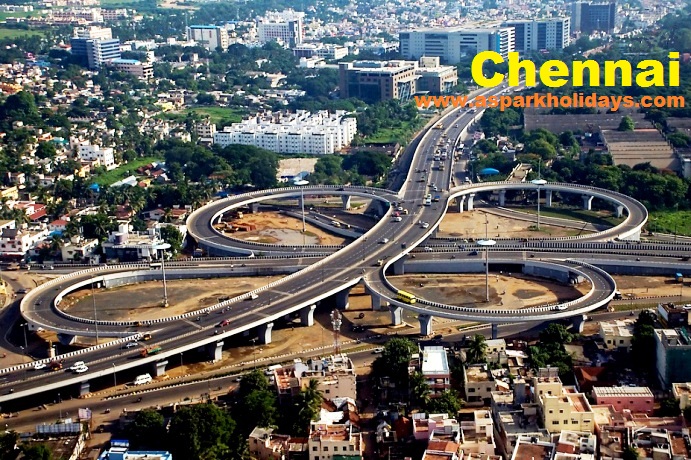 Chennai, which started as Madarasapattanam, a fishing village has now developed and has become the Gateway of South India. The city has expanded quickly along the Old Mahabalipuram Road and the Grand Southern Trunk Road (GST Road) in the south and towards Ambattur, Koyambedu and Sriperumpudhur in the west. Marina Beach runs for 6 km (3.7 miles), spanning along the shoreline of the city and it is the second longest urban beach in the world.

Chennai has been the most visited Indian city since 2008, in terms of foreign tourists' arrival. The New York Times has found Chennai fit to be featured as a place to be in 2014. In fact, it is the only place in India that the newspaper has featured among 52 tourist destinations. Visit the 350 year old capital of Tamil Nadu, the seat of rich Carnatic music and the birth place of Bharatnatyam, the oldest classical dance in India. A unique city that is as trendy as it is traditional and one of the safest Metropolitan cities of India.

The temples of Tamilnadu are unique artistic marvels that attract tourists all over the world. Chennai and the nearby temple town Kancheepuram have several centuries old temples which enthral visitors with their tall "Gopurams" and exquisite sculptures. The oldest buildings in the city dates back to 7th and 8th centuries, which include the Kapaleeshwarar Temple in Mylapore and the Parthasarathy Temple in Triplicane built in Dravidian style architecture.

Chennai has world-class medical facilities, including both government-run and private hospitals. Chennai attracts about 45 percent of health tourists from abroad and attracts an equal number from other parts of India due to its world class facilities and trained specialists available. The Tidel Park in the city is the largest IT Park in Asia and houses the head offices of leading software companies. Chennai is the second leading exporter of information technology (IT) and business process outsourcing (BPO) services in India. It is also known as the Detroit of India because of its automobile manufacturing industry which produces more than 40% of the auto parts and motor vehicles in India.

Visit the Marina or Elliots, frolic about in the waves watching the Bay of Bengal and also get a taste of Chennai street-food in the many eat-outs on their shores. Needless to say about the filter coffee, idly, vada and dosai which are a gourmet's dream come true. If you want a quieter time with the sun, sand and the waves, Mahabalipuram with its numerous beach resorts is just the place for you.

Fulfil your shopping extravaganza in any of the magnificent malls or traditional silk show-rooms - Not to forget the pavement shops of T. Nagar and Sowcarpet which are a shopper's delight.

So, gear up an intellectual feast in our two-day academic extravaganza coupled with a fun filled break in our delightful city.

Geography of Chennai - Chennai is located near the 13th north parallel and 80 degree longitude. The city stretches its 19 km length along the Commander coast and extends inland about 9 km at its widest. Its irregular shape covers about 172 sq km. It is a fairly low-lying strip of land, its highest point being only 60 m above sea level. Chennai is trisected by two east-flowing rivers that traverse its width. The Coovum river almost divides the city into half and the Adyar river divides the southern half of the city into two. The historic Buckingham canal runs nearly parallel to the coast almost through the entire length of the city. The city has somewhat ungenerously described as having three seasons - hot, hotter and hottest. (Interactive map of Chennai)

History of Chennai- The region of Chennai was called Tondaimandalm and had its military headquarters at Puzhal, which is now a small and rather insignificant village on the outskirts of the city. Modern Chennai grew out of a small village when in 1639 a fishing hamlet called Madraspatnam was selected by early English merchants of the East India Company as a site for the settlement. Founded in 1639 on land given by the Raja of Chandragiri, the last representative of the Vijayanagar rulers of Hampi. A small fort was built at a fishing settlement in 1644 and a town, which subsequently became to known as George Town, which grew in the area of fort St. George. The settlement was granted its first municipal charter in 1688 by James II. It thus has the oldest municipal corporation in India. During the 18th and early 19th centuries, when the British and French competed for supremacy in India, the city's fortunes waxed and waned. It was briefly occupied by the French on one occasion. It was used by Clive of India as a base for his military expeditions during the Wars of the Carnatic and, during the 19th century, it was the seat of the Chennai Presidency, one of the four divisions of British Imperial India. After independence the city continued to be known by the name Madras until it was officially converted it to Chennai in 1997.

Fort St. George- It is at Kamarajar Road. It is the first British fort  build around 1653 by the British East India Company. It has a 20 feet thick wall. The present structure, a fine example of 17th century British military architecture, was mostly built in 1966. The country's tallest flagstaff is here, thought to be over 300 years old. The 24 black Charnockite pillars are those reclaimed by the British in 1762 of the original 32 which once formed the colonnade of the present Secretariat building. Now it houses the Secretariat and the Legislative Assembly.

Marina Beach- Lining the east of the city is the famous Marina beach, at Kamarajar Road, 3 Km away from Madras. This is supposed to be the second longest beach in the World and runs to a length of 12 Km. On the beach there is the Anna Park, named after the founder of D.M.K (Dravida Munnetta Kazhakam) Anna Durai and the tomb of M.G. Ramachandran who was a film star and the charismatic Chief Minister of Tamil Nadu. The beach can be ideally visited in the early mornings or in the late evenings when the area becomes a virtual ground; with food stalls and other entertainments.

Government Museum Complex- It is situated in Pantheon road. This is not for its exquisite collection of more than 2000 Indian bronzes and Amaravathi marbles. Three great buildings of architectural value - the Museum Theatre, the extension hall and the Connemara Public Library are in this complex. The present Museum has several sections, four galleries- Hindu sculpture gallery, the Amaravathi gallery, the Bronze gallery and the National art gallery constitute the main attractions.

Fort Museum- It is at Fort St. George. Museum has 10 rooms displaying the documents of Indian History. The old uniforms, coins, padlocks, old prints and palanquins are displayed here. The banquet hall upstairs has a collection of paintings of the governors and officials of the British regime.

St. Mary's Church- The church is at Fort St. George. The oldest masonry church was consecrated in 1680. It has a building with its three arched aisles and bomb-proof roof.  The marriage of Governor Elihu Yale (of Yale University fame) was the first to be performed at this church.

St. George's Cathedral- It is at 222 Cathedral road. It is a white colonial church, with a beautiful garden. It is the headquarters of the church of South India.  It has a 130 feet spire with its interior very light and airy with stucco walls. The decorated roof and many fascinating tablets and tombs add to beauty of the spire.

Parthasarathi Temple- It is at Peter's Road, Triplicane. It is one of the oldest temple in Madras, built by Pallavas in the 8th century and rebuilt by the Vijayanagar Kings in 11th century. The temple is dedicated to Krishna, one of the incarnations of Vishnu. It has a  coloured gopuram and several shrines with beautiful carvings. There are many stalls selling flowers, puja articles, small idols, musical instruments and jewelry around the temple.

Sri Kapaleswarar Temple- This temple is situated near Kutchery Road, Mylapore. This ancient Siva temple is a delightful introduction to Dravidian temple sculpture and architecture. The magnificent 37 meter tall gopuram is one of the main attraction of this temple. Non-Hindus are not allowed to enter the inner courtyard. The outer courtyard has several bronze statues.

Guindy National Park- This is the countries only Wildlife Sanctuary within a city's limits. This park spread over an area of 27.6 sq. km. Raj Bhavan, the Governor's mansion, occupies one end of the park, and at the other is the beautiful forest - girt campus of Chennai's famous Indian Institute of Technology.

Snake Park- It is at Sardar Vallabbai Patel Road. Visit : Wednesday to Monday from 0830 to 1730.Tuesday holiday. There are more than 40 species of common snakes of India here. The crocodiles, chameleons, monitor lizards and tortoises can also be seen in their natural setting.

Crocodile Bank- Not far from Mamallapuram, 42 km from Madras, this crocodile breeding and research centre is run by Romulus Whittaker. It was set up in 1976. This bank was started to protect India's dwindling crocodile population and to preserve the Irula (Snake catching), tribe's way of life. This bank has already produced more than 6,000 crocodiles. There is also a snake farm where anti - venom is produced. Several species of Indian and African Crocodiles and Alligators bred in captivity are kept here in open pools. The snake venom extractions are a great attraction to the visitors and it help the Irulas (tribe) to maintain their way of life.

DakshinaChitra (Picture of the South)- It is a unique Heritage village situated at Muttukadu on the new Mamallapuram Coastal Road, 20 Km from Chennai. It offers the visitor an unforgettable and authentic insight into the lifestyles of the diverse people of South India. The Arts and Crafts village, Dakshinachitra narrate the story of the South Indian Culture. The Tamil history, language and way of life can be experienced with a guided tour. Architecture of the past 200 years is represented in the real rural setting. Every house is typical of its own professional group. Traders, potters, weavers, and others working in the traditional way make exquisite pottery, baskets, and carved stone items, some of which are for sale. The center is now developed to include the cultural replicas from all four states of South India. The folk and classical dance performances can be seen here.

Birla Planetarium- Built in memory of B.M. Birla, the well known industrialist and visionary, the Planetarium is considered to be the most modern in the country. It is located at Kottur near Anna University.

Kalakshetra- In Thiruvanmiyur, beyond Elliot's beach, is Kalakshetra or 'Temple of Art'. It was founded in 1936 by Rukmini Devi Arundale to revive interest in Bharatanatyam which is the classical dance form of the state. This institution is run on the ancient gurukulam system. Throughout the year Kalakshetra conducts music recital and dance performances in different parts of Chennai.

Muttukadu Boat House- Situated on the edge of backwaters, this place has facilities for boating and wind-surfing. A windsurfing regatta is organised in Muttukadu, in February every year. Competitions in windsurfing and other water sports are also held. Training and demonstration programs are held for youth.