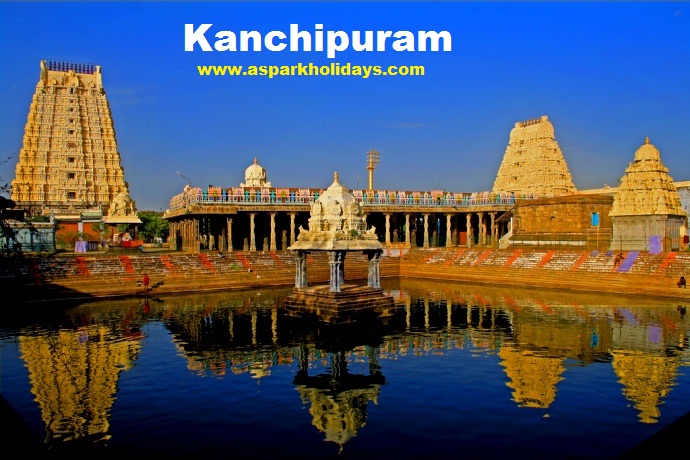 About Kanchipuram
Kanchipuram (75 kms from Chennai) is one of the seven holy cities in the country, and a visit is believed to bestow salvation. Kanchipuram once had over a thousand temples. Today, there are more than a hundred extant, and all are worth a visit. Kanchipuram also has some notable churches and mosques.

Ancient Kanchipuram is the city of thousand temples and is one of the seven most sacred pilgrim centres Ekam for the Hindus. This city is also known as Kanchi. There now remain about 126 temples in Kanchi and a few more in its outskirts. The city was the capital of the early Cholas and it was the Pallava capital between the 6th and 8th centuries.

Kanchipuram is a major seat of Tamil learning as well as an important place of pilgrimage for Buddhists, Jains and Saivite Hindus. Apart from its temples, this small town is also known for its thriving handloom industry. The weavers of Kanchi have settled in the temple town more than 400 years ago and have given it an enviable reputation as the producers of the best silk and cotton sarees in the country. Woven from pure mulberry silk, these sarees woven in dazzling colours are embellished with fine gold thread (zari) and are available in every imaginable design and variety. This makes the choice of selection quite challenging for the buyer.

Temple festivals are held throughout the year and apart from the temple car or the ratha festivals are held in January, April and May. There are other days when the idols are taken out in procession on their respective vahanas or vehicles.

If you aim to visit a destination that is religious, historical, cultural and entertainment clubbed in one, Kanchipuram is the place for you. Considered the religious capital of South India, the city of thousand temples, has a lot to offer. If you set aside whatever faith you may follow, you are sure to be impressed by the sheer architectural skills exhibited in the temples in Kanchipuram. The temples stand proof for the dominance of Dravidian heritage and the city glorious past, when it was ruled by kings who were not only powerful but loved and patronized arts. Kanchipuram, which is one of the tourist cities in Tamilnadu is also famous for silk saris. Given below are 6 important places to visit in Kanchipuram.

Ekambareswarar Temple- Dedicated to Lord Shiva, the temple has been spoken about by Tamil poets who lived in the 2nd century. The temple had undergone many changes since then. During the rule of Pallavas, the original structure was pulled down and new temple was built. During Chola dynasty, the temple was improvised. The temple in its present form was the work of Krishnadevaraya, the most famous Vijayanagar King in the year 1509. The temple is huge and the doors are nearly 40 feet tall. The temple is a proof of the architectural splendor of the bygone era. The temple has a mango tree, which is 3500 years old.

Kamakshi Amman Temple-  Goddess Shakti is worshipped in three major cities out of which, Kanchipuram ranks first in importance. The gold plated main tower and the golden chariot are the temple special features. The sculptures of the 7th century temple are awe-inspiring. This huge temple is constructed in around 5 acres of land. The temple houses a gallery, which presents the life history of Adisankaracharya.

Kailasanathar Temple- Belonging to the 8th century, Kailasanathar Temple is one among st the oldest structures in the city and it is dedicated to Lord Shiva. The construction was commenced by Rajasimha Pallava. His son Mahendra Varma Pallava completed the temple. Pallava kings were famous for their love for architecture and one glance at the temple would suffice to understand the importance they attached to arts and architecture. The stone carvings with intricate and dedicated workings are beyond words.

Kanchi Kudil- Kanchi Kudil represents the life of the people of the city with a view to attract tourists and let them feel the essence of life as lived here. Kudil means house. The house is over 90 year old and its architecture resembles the olden style. You will get a clear picture of the entire town and its specialties. The present heritage inn was originally an ancestral house. You could gain a deep knowledge on the city, its cultural richness and heritage. Be it the food that is served here or the furniture in the inn, everything speaks of the city glorious past. In spite of it being built in ancestral style, you can expect to have all modern facilities that you may need. Cultural programs are organized in the evenings through which you can learn about the arts of the city. For your information, the city flourished in arts in the ancient period and you can see the influences even today.

If you want some time away from man made wonders, you may seek Vedanthangal Bird Sanctuary, which offers delightful views of birds across the world. Considered a bird watcher paradise and rightly so, the place would make you a wonderful photographer, if you are already not one. It is located 48 kms from the city. This is ranked among-st the oldest bird sanctuaries in India. Spread over a sprawling 74 acres of land, you will find the views stunning with migratory birds visiting the place from all over the world. The best time to visit the place would be between the months of October and March.

Devarajaswami Temple- The temple is famous for its richness of exquisite sculptures. The temple is dedicated to Lord Vishnu and it was constructed by Vijayanagar Kings. The intricately carved pillars are examples of the architectural brilliance of the past. One of the unique features of the temple is the huge chain that was carved off a single stone. A 10-meter tall statue of Vishnu lies immersed in the large tank. The tank is drained once every 40 years and the statue can be viewed only at that time. Photo Credits

The city of temples has a lot more historically famous and architecturally rich temples for you to visit. If you have the time to stretch a bit out of tour, you can find various tourist places in Kanchipuram including the famous Mammalapuram, Muttukkadu, Covelong Beach and Dutch Fort. You can have a perfect holiday and have a great time enjoying the wealth of architectural expertise the ancestors possessed and if you love, you could buy a few silk saris Kanchipuram is famous for.