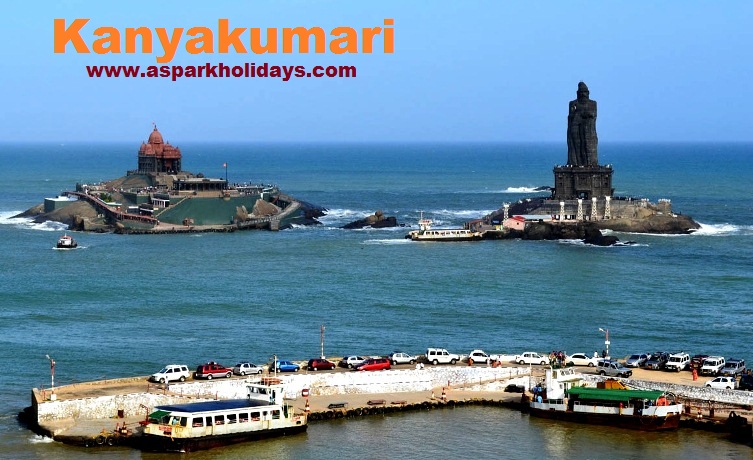 About Kanyakumari
Kanyakumari is located at the southernmost tip of peninsular India. It is the place where the waters of the Bay of Bengal, the Indian Ocean and the Arabian Sea meet. Kanyakumari is visited by thousands of tourists from all over India throughout the year. The place Kanyakumari is known so due to the temple dedicated to the virgin goddess Kanya Kumari. Kanyakumari was referred by the British as Cape Comorin. Kanyakumari is one of the important Hindu pilgrimage center due to the famous temple of Kanyakumari. The multicolored sand is a unique feature of the beaches here. From the Kanyakumari one can view spectacular sunrise and sunset.

It is at its best during Chaitra Purnima (full moon day in April) when the sun and moon are face to face at the same horizon. At this place the spiritual leader Swami Vivekananda also spent some of his days in meditation upon a rock off the coast. Due to its proximity to the sea, Kanyakumari enjoys a pleasant climate. The best time to visit this place is between October and March. In summers, the temperature prevails at 34.8 degree Celsius and in winters it is around 20.4 degree Celsius.

History of Kanyakumari
Kanyakumari was also known as the Alexandria of the east. This place was a great center for art, culture, civilization, commerce, trade and pilgrimage for the years. During the early part of the eighth century AD Islam entered the southern part of India through the sea route with traders and missionaries. Christianity arrived at this place in 52 AD through St. Thomas, one of the twelve Apostles of Christ. Islam, Christianity and Jainism have greatly contributed to the architectural wealth and literary heritage of this place. The Cholas, Cheras, Pandyas and Nayaks who were the great rulers of south India also controlled Kanyakumari. All the famous temples were built during their rule which are known for their architectural beauty. During the British Raj, the Britishers gave the name Cape Comorin. It may be due to their inability to pronounce the local name. According to the legends the Kanya Devi, an avatar of goddess Parvati undertook penance to gain the hand of Lord Shiva in marriage. But the Lord Shiva did not turn up at the auspicious time and the wedding never took place. The rice and cereals meant for the marriage remained uncooked. The disappointed goddess decided to spend her life in Kanyakumari as a virgin, and all the food prepared for the wedding was wasted and that it turned into the colored sand which can be seen on the southern shores of the subcontinent.

Kanyakumari Temple- The Kanyakumari temple or the Kumari Amman Temple is one of the ancient temple which is located on the shoreline in Kanyakumari. This temple is dedicated to the goddess Parvati who appeared in Kanyakumari as the Kanya Devi, the virgin goddess. This temple and the adjoining ghat attracts tourist from all over the world. The diamond nose ring of the deity is famous for its sparkling splendor which is said to be visible even from the sea. Non Hindus are not allowed to enter into the temple.

Swami Vivekanda Rock Memorial- Swami Vivekanda Rock Memorial is situated on a little rocky island just off the coast, about 500 meters away from mainland. This memorial stands on one of two rocks separated by about 70 meters. This memorial belongs to Swami Vivekananda, the great Indian philosopher and was built in 1970. In 1892 he sat here in deep meditation on the rock, where this memorial is located now. There is a dhyana mandapam where one can sit in a serene atmosphere and meditate. The design of the mandapa incorporates different styles of temple architecture from all over India. It houses a statue of Vivekananda. On the island one can also see the Shri Pada Parai, the footprints of Kanyakumari, the virgin goddess. To reach the memorial one has to hire the ferry services. A memorial has also been recently built which is dedicated to Tiruvalluvar, the author of the philosophical work Tirukkural.

Gandhi Memorial- The Gandhi Memorial is located at the place where the urn containing the ashes of Mahatma Gandhi was kept for public view before a portion of its contents were immersed in the three seas. This memorial resembles an Oriyan temple. This temple is designed in such a way that on 2nd October, his birthday, the sun rays fall directly on the spot where his ashes were kept.

Vattakottai (6 km)- Vattakottai is an 18 century circular fort located on the beach. It is a popular picnic spot which is located six kms. from Kanyakumari.

Udayagiri Fort (34 km)- The Udayagiri fort is located about 34 kms from Kanyakumari. This fort was built by King Marthanda Varma (1729-1758 AD). This fort has a foundry for casting guns. The king's trusted European general De Lennoy's grave is also located within this fort.

Thiruvalluvar Statue- The gigantic 133 feet high statue of Tamil saint poet Thiruvalluvar is set ona rock amidst sea. Thiruvalluvar is famous for his work Thirukkural which is regarded as a directory of code of conduct and ethics to the Humanity.

Akkay Aruvi Water falls (33 kms.)- The beautiful falls are located 14 kms. From Nagercoil. There is also a small shrine associated with saint Agasthiar, which attracts a large number of devotees on the full moon day of Chithirai (Apr.-May).

Kumarakovil (34 kms.)- The beautiful Lord Muruga Temple here is set on a 200 feet high hillock. It also enshrines image of Goddess Valli, the spouse of Lord Subramaniya or Muruga.

Udayagiri Fort (34 kms.)- This 18th century fort 14 kms. From Nagercoil was built by king Marthanda Varma. The grave of the Dutch Gen. Del Lennoy, one of the most trusted generals of the king, lies within the fort.

Suchindram (13 kms.)- Suchindram is located about 13 kms from Kanyakumari and bears the imprint of various kingdoms. The Thanumalayan temple in Suchindram is a repository of art treasures belonging to those kingdoms. This temple is famous for the beautiful gopuram, the musical pillars and the impressive 6 m tall statue of the monkey god, Hanuman. The main deity in this temple is in the fom of a Shivlinga which is the representation of the combined forces of Siva, Vishnu and Brahma. It is one of the few temples in the country where the three trinities are worshiped together.

How to reach There- Kanyakumari is easily accessible by air, road and rail with the other major Indian cities and states.

By Air- The nearest airport is located at Trivandrum which is about 80 km. It is directly connected with Bangalore, Mumbai, Cochin, Delhi, Goa and Chennai by regular flights.

By Rail- Kanyakumari as the terminal point of the Southern Railway is well linked to the other parts of the country. It is well connected to Trivandrum, Delhi and Mumbai by broad-gauge railway network.

By Road- Kanyakumari is connected by road to Trivandrum, Nagarkoil, Tirunelvelli, Tiruchendur, Tuticorin, Madurai and Rameshwaram.