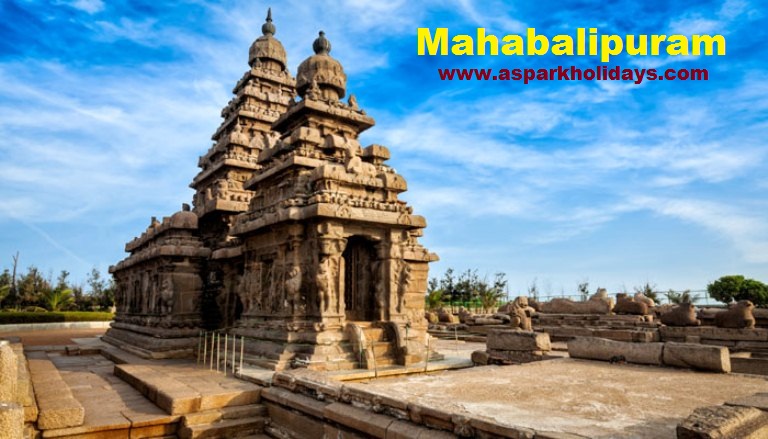 About Mahabalipuram
Mamallapuram, popularly referred as Mahabalipuram was a seventh century port town of the South Indian located 60 km south from Chennai city in Tamil Nadu. Mahabalipuram is magnificent place mainly built during 7th and 9th centuries. The name Mamallapuram is meant to have been given after the Pallava king Narasimhavarman I, who was a great worrier and courageous wrestler ruling during the period between 630 to 668 CE. Some of the monuments in Mahabalipuram have also been recognized by the UNESCO and are must see for the tourists on their tour to Mahabalipuram.

After the Gupta Dynasty, Pallava ruled from 3rd century to 9th century. Pallavas open up various new styles in arts and architecture. Mahabalipuram is the excellent place to admire proficiency. About Mahabalipuram it exposes excellence and creativity of Pallava. Monolithic Monuments, Temples made from rock, bas-relief sculpture are well illustration of the Dravidian architect. Mahabalipuram is not only popular for its historic heritage but also for the colorful Festivals that are celebrate every year with happiness and Golden-sandy beach surrounded by the shiny ocean at night fading moon, glittering stars and waves add wonder to this place. The tourist attractions in Mahabalipuram reflect the historic charm of this place.

This tourist destination has been listed among-st the UNESCO World Heritage Site because of its importance and ancientness of the sculptures and temples which depict its historical past and traditional legacy and also about the Dravidian civilization. The major attraction of Mahabalipuram is the Shore temple which is devoted to Lord Shiva and Lord Vishnu, sited on the Bay of Bengal with the gateway from the Western side away from the sea. It is one of the world heritage sites and also one of the ancient rock cut temples in the country. Noted for its complex carvings embellished with beautiful motifs and craftsmanship, the architectural designs of this temple are absolutely fascinating.

However, there are many other temples and statuettes which are magnificent in their carvings, one of which is Thirukadalmallai, the temple devoted to Lord Vishnu which was constructed by the King of Pallava dynasty to protect the sculptures from the waves coming from the sea. It is said that after the construction of this temple, the sculptures were able to withstand the turbulent waves of the sea and have been preserved since then. But the place is most renowned for Arjuna's Penance, which is a relief statue on a huge scale representing an episode from the Hindu epic, the Mahabharata; and the Varaha Cave, which is a small rock-cut temple built during the 7th century. Plus, there are Pancha Rathas (Five Chariots) which comprise of five colossal pyramidal constructions named after the Pandavas: Yudhistra, Bhima, Arjun, Nakul and Sahdeva together with their wife Draupadi. All the five chariots are built from granite carved in a unique style. These monuments and sculptures are delicate examples of the architectural pattern of the Pallava dynasty.

Apart from the monuments and temples, there are Mandapas which were built during the Pallava dynasty. These Mandapas are very beautifully carved and are adorned with spell-bounding motifs. The biggest Mandapam is dedicated to Lord Krishna and the sculptures inside it marvellously portray the brave legends of Lord Krishna. Besides this, there is Mahishasuramardini Mandapam, which is a rock cut temple depicting the war between the Goddess Durga and the demon Mahishasura, who changed himself into a buffalo. This Mandapa is the finest example of the architectural designs of the Pallava dynasty; the carvings and the designs are simply splendid and breathtaking. The Ganesh Mandapam is another shrine which is visited everyday by the people.

Fairs & Festivals- Pongal, the most important festival of the Tamils, is celebrated in mid-January every year. The festival is celebrated amidst gaiety and joy not only in Tamil Nadu but also in most parts of South India.

Mahabalipuram Dance Festival is an occasion for the dance lovers to enjoy the performances of the artists from all parts of the country. The festival is celebrated in the month of January/February every year. The Shore Temple forms the backdrop of this festival and the music from the musical instruments mixes with the natural music of wind and the sea. The Mahabalipuram Dance festival is an occasion when artists from all over the country come together to perform.

The Sthalasayana Perumal temple festivals, Masimagam and Brahmothsavam, are held in the month of March.

Best Time to Visit- The climate of Mahabalipuram remains hot and sultry throughout the year with a maximum temperature of 35°C and a minimum of 19°C. The best time to visit this place is during October to March. One is advised to avoid the monsoon period. Mahabalipuram Resorts are packed during the peack season, thus advance booking for Resorts Mahabalipuram is advised.

How to Reach-
BY AIR - The nearest airport from Mahabalipuram is Chennai (Madras), located around 60 km away. One can get flights for almost all major destinations in India and abroad.

BY RAIL - The nearest railway station, Chengalpattu, is around 29 km away from Mahabalipuram. Trains for Chennai and several other major cities in South India are available from here.

BY ROAD - Mamallapuram is connected by road to Chennai, Tirukkalikundram (Pakshithirtham), Kanchipuram (65 km), and Pondicherry. We would provide you all India tourist permit vehicles for the local transportations and also for the intercity drives too.

Tourist Attractions - The Varaha Cave, a small rock-cut mandapam (hall), is a faceted and finished gem with four panels of the famous Pallava doorkeepers who wear an expression of "pious rapture," as Heinrich Zimmer, a leading expert on Mahabalipuram put it. There is about them a mood of contemplative reverie, a lyrical softness and subtle grace totally at variance with the primordial machismo their role as guards of the gods imposes on them. Accommodation in Resorts Mahabalipuram close to the tourist spots can be arranged.

Feeble sunlight glimmers on panels of enduring beauty in the Mahishamardini Cave. The Somaskanda sculpture radiates peace, power and wisdom while Lord Vishnu in omniscient repose is a masterpiece of dhwani (the art of suggestion) perfected by the Pallava sculptor.

Arjuna's Penance, perhaps the world's largest bas-relief, is the universe itself in stone, throbbing with a vastness of conception. Legend has it that King Bhagiratha had to bring down to earth the celestial Ganga to purify and redeem the cursed souls of his ancestors. But the river in its torrential plunge would inundate the earth, and so he had to undergo a penance to propitiate Shiva who finally received the flood in his matted locks and let it trickle down. This was a sight for the world's creatures to see and they gathered round. The cleft in the rock depicts the descent of Ganga, a theory supported by the ruins of a stone water tank on the hill. There is a forest with tribal people and all forms of animal life, just as they would appear in their habitat. Women clothed in an aura of ineffable grace, a rich inner beauty transfiguring the plainest of them. The whole scene has a delicate edge of humor. Juxtaposed against the ascetic is a cat doing rigorous penance too, eyes firmly shut, even to the delectable mice scampering around within easy reach.

About 5 km north of Mahabalipuram is Tiger Caves, a rock-cut shrine, possibly dating from 7th century.

Tirukkalikundram, around 14 km from Mahabalipuram, is a pilgrimage center. The place has a hilltop temple dedicated to Lord Shiva.

The five rathas (chariots) are architectural precursors of the temples of south India. The smallest and the simplest is the Draupadi ratha and the largest is the multi-storeyed Dharmaraja ratha scoped from a monolithic rock. These small, unfinished shrines ravaged by war and weather are things of undiminished beauty.

However, it is the Shore Temple that evokes the spell of Mahabalipuram. A three-in-one abode of god-a Vishnu temple sandwiched between two Shiva temples-it is a visual delight, its precincts abounding in architectural masterpieces.

The Sculpture Museum in East Raja Street contains more than 3,000 sculptures by the local artisans, made in wood, metal, brass, and cement.