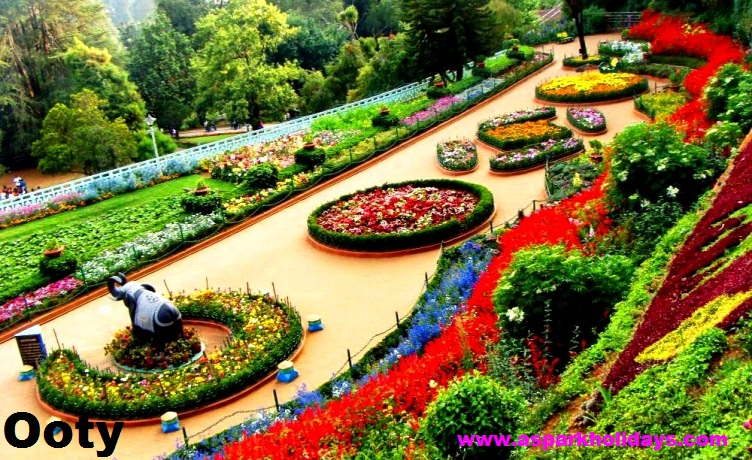 About Ooty
Ooty, the 'Queen of Hill Stations' is also known as Udhagamandalam. It is the capital of Nilgiris district as well. One of the most popular hill stations of India, it has Nilgiris, the 'Blue Mountains', in its background. The hill town of Ooty, discovered by a British Collector, John Sullivan, was once a summer resort and weekend getaway for the Madra residency, during the colonial times in the 19th century. Located at an altitude of 2,240 meters above sea level, it has a number of popular tourist attractions to boast of. One of the major attraction is its popular tea estates. This hill station in Tamil Nadu is nestled in the Nilgiri ranges of Snowdon, Club Hill, Doddabetta as well as Elk Hill. One of the most well-known hill stations in the Southern part of South India, is visited by a large number of local as well as foreign tourists.The best time to visit ooty is from October to June.

Brief Historical Account
From 1104 to 1141 AD, Ooty was under the rule of Vishnu Vardhana, a ruler of the Hoysala Kingdom. Another well-known ruler of Ooty was Tipu Sultan. In the year 1799, this hill town came under the British East India Company, after Tipu Sultan had to sign a treaty with the company. During the 19th century, John Sullivan, a British Collector started developing Ooty in the form of a summer retreat for the British. Throughout that time, a number of clubs, cottages, and other buildings were built that offered entertainment and recreational facilities to the British officials. Rail connection was laid to reach Ooty during 1880. Gradually, this hill town became the place for the growing of tea leaves, thus, came up several tea estates. After independence, the Government of India, started promoting Ooty as a tourist destination.

Tourist Places in Ooty- Ooty, often known as the queen of hill, has many tourist attractions. The most striking feature of this hill town and definitely a major tourist attraction is its scenic beauty. The misty mountains and the green valleys is a paradise on earth. Besides the natural splendor there are a number of Ooty tourist attractions, these include

Botanical Gardens- The Botanical Gardens are one of the primary Ooty tourist attractions. Covering an area of about 50 acres, this garden covers the slopes of the Doddabetta peak in Ooty.

Doddabetta- The highest peak in the Hills of the Nilgiris, this place lies at the point of the Eastern and the Western Ghats and is definitely tops the list of Ooty tourist attractions.

Government Museum- Set up in the year 1989, this museum is an Ooty tourist attraction specifically for its collection of tribal objects and artifacts.

Kamraj Sagar Lake- Kamraj Sagar Lake is actually a dam which is located in the outskirts of Ooty. The woods and the greenery in this place, makes it a great picnic spot. The water is extremely cold and one can also have a good fishing experience in the place as fishing industry has flourished quite a lot in this region.

Kandal Cross- Kandal Cross is a Roman Catholic Church. It is well known for making the wishes of people come true. The church is recognized for curing the ill and blessing the people making it a big pilgrim place where prayers are offered on every Friday evening.

Lamb's rock- This is a view point in Ooty from where one can get beautiful views of the vast lush green tea estates. It makes an excellent picnic spot. Named after Captain Lamb who tried to open a path to that point, the Lamb's rock is an uneven cliff which drops down to the jungle below.

Ooty Golf Course- The golf course is located at the Old Pykara Road and has an elevation of 7200 ft. In 1891, Colonel Fane Sewell established this golf course which sprawls over an area of over 193 acres. The golf course has a full course of 18 holes. Playing golf at this altitude is completely different experience.

Ooty Lake- The Lake in Ooty the center of tourist attraction. The lake adds an extra measure of glamour to the hill station. It covers an area of 65 acres and was constructed by John Sullivan in 1824. The Boat house alongside the lake offers boating facilities to tourists. In summers, boat races and pageantry are organized at the lake.

Rose Garden- Rose garden is located on the slopes of Elk Hill. The over four hectares of land has got five terrace farming. The garden has over 2800 species of roses. The department of Horticulture does the maintenance of the garden. It is one of the best gardens in South Asia.

St Stephens Church- The oldest Church in the Nilgiri, St Stephen Church is located near the house of John Sullivan, the founder of Ooty. The Gothic structure still preserves its Victorian ambiance. The entire church is wonderfully built out of wood, its carvings and has stained glass windows giving it a different lure altogether.

Tea Factory- The tea factory in Ooty showcases the art of tea making and there is also a tour facility available inside the tea processing factory. It is more like a museum and one will gain knowledge on the process of tea making and quality. It is located on the Doddabetta Road.

Best Time to Visit- Ooty can be visited at any month of the year. However, the ideal time is considered to be between March and June. The temperature does not rise more than 20 degree Celsius at this time of the year.

How to Reach Ooty- Ooty is one of the most scenic popular hill stations in southern India. Nature has gifted the place with immense beauty. Its colonial charm and innate splendor attracts tourists from all over the world every year. Ooty has a well-linked network of Air, Rail and Road ways.

By Air- The nearest airport to Ooty is located in Coimbatore. The hill station is at a distance of about 98 kilometres from the Coimbatore Airport. The airport is connected to Bangalore, Chennai, Mumbai and Cochin by Indian Airlines flights. In order to reach Ooty from the airport, one has to hire a taxi or a bus.

By Road- Ooty is also connected to all the nearby towns and cities by good roads. The hill station connects to various other important cities of South India like Chennai, Bangalore, Mysore, Coimbatore, etc. The road to Ooty from Coimbatore is popular for its scenic beauty. As Ooty is located on NH 67, several tourist buses and taxis commute here without any hassle.