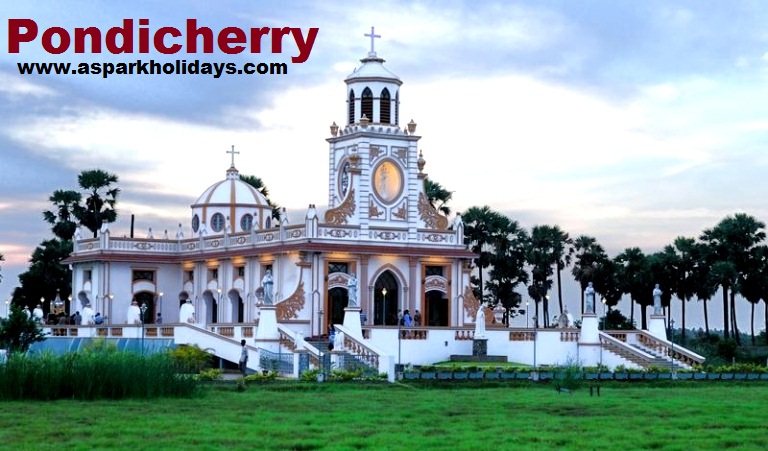 About Pondicherry
Pondicherry, earlier known as Pondicherry, a very popular destination among tourists from India and abroad, has been touted as the French Riviera of the East.

Located in South India, Puducherry is a Union Territory. Known for its astounding beauty, Pondicherry attracts visitors from around the world. It was a former French colony.

History of Pondicherry- The history of Puducherry dates back to ancient times. There is evidence that the Romans had visited the place around 1st century AD to do trade. At the beginning of the 4th century AD, the Pallava kingdom ruled for a short period followed by different southern dynasties like the Cholas, Pandyas, Vijaynagara and the Sultanate of Maudrai. In 1674, the French governor Francois Marin transformed this small fishing village into a grand port town.

There was intense rivalry between the French and the British in India and many wars were fought but the French managed to retain power in Puducherry. Around the 18th century, the town grew considerably.

Climate of Pondicherry- This place lies close to the sea, which is why the climate here is warm and humid. The summer season experiences a rise in temperature that goes up to 38 degrees. In winters, the temperature is pleasant. The winter season begins in November and the temperature never falls below 20 degrees. The North West monsoon is from July to August and again from November to January. The summer season begins from March and lasts till July. Tourists are advised to visit the place between the months of December and March.

Pondicherry is a typical Dravidian place where you will find a majority of people to be Dravidian. In spite of its French culture and character, the place is truly Indian. Although the original people are of Tamil origin, the district is comprised of people from various Indian states and foreign countries. You can experience the French culture even after decades of independence from French. It comprises a multi-national culture and is cosmopolitan in nature. Exposure to different cultures has converted this small place into a very attractive multi-cultural city that has very distinct characteristics. The crafts that you see here are traditional and the famous handicrafts that you can buy here is the Puducherry bommai.

The food here is simply delicious. The taste is truly international with a hint of local touch. The French cuisine blends well with the local cuisines providing a totally exotic food flavor.

Places to Visit in Pondicherry- Puducherry, previously known as Pondicherry and more popular as 'Pondy', is an eternal favorite with tourist and travelers. Ruled by the French for more than three hundred years and under the French jurisdiction until 1954, Pondicherry has retained French influences. The wonderful buildings made by the French stand pretty as glorious examples of the classic French architectures.

Pondicherry Beach- Flanked by a flowing creek on one side, this one is a beach lover's paradise. There is plenty to do here including trekking, beach volleyball, catamaran rides and also cruises in the backwaters.

Raj Niwas- Once the palace of the French Governor Dupleix, Raj Niwas now serves as the official residence of the Lieutenant Governor of Puducherry Union Territory. It is located in the Government Park and some parts of it are open to the public.

French Fort Louis- The French Fort Louis in Pondicherry is very popular with history freaks and tourists of the city. According to historical sources, it was constructed around the year 1709. The magnificently built French Fort Louis has a pentagonal shape and is bordered with a moat. It has five bastions and a couple of gates. The exciting part of Pondicherry's French Fort Louis is the underground chambers which were made to store arms, ammunition and other commodities.

Immaculate Conception Cathedral- This 300 year old church is the cathedral for the Archdiocese of Pondicherry and Cuddalore. Its construction started in 1791 before the French occupation of Pondicherry.

Basilica Of The Sacred Heart Of Jesus- Consecrated in 1907 and renovated in 2005, the building of Basilica of the Sacred Heart of Jesus is a fine specimen of Gothic style of architecture. The church is a well-known pilgrimage spot for Christians in India. Its windows are decorated with stained glass paintings of 28 saints. The church premise has a grotto, a parish hall and an adoration chapel.

Sri Varadaraja Perumal Temple- It is considered to be the oldest Hindu temple in Pondicherry dating back to 600 A.D. Built in Dravidian style of architecture, this temple is dedicated to an incarnation of Lord Vishnu.

Government Park- The Government Park in Pondicherry is a testimony to French architectural brilliance. It is located at the centre of the old colonial town and surrounded by influential government buildings such as Raj Niwas (the Lt. Governor's Palace), the Legislative Assembly, Ashram Dining Room, Government Hospital, the Cercle de Pondichery private club and the old Hotel Qualite. The lush green lawns and flower gardens in the park provide a rejuvenating ambiance making it a perfect place to relax. The magnificent Aayi Mandapam at the centre of the park is one of the reasons behind the popularity of the Government Park. The tower follows Greco-Roman style of architecture. It is referred to by the name of Aayi, once a renowned courtesan who, according to a local legend, destroyed her home and made a water tank in its place for the people of the region.

Aurobindo Ashram- Sri Aurobindo Ghosh, the great patriot, philosopher and spiritual leader, spent his years of spiritual awakening in Pondicherry. The Ashram, which was built by Sri Aurobindo himself, is visited by millions every year to seek peace and spiritual enlightenment. The Auroville township located close to Pondicherry was set up to promote the aims and ideals of this ashram. It was designed by the renowned architect Roger Anger and is a great place to learn more about India and its spirituality.

Manakula Vinayagar Temple- Constructed around 1666 AD, this Hindu place of worship in Pondicherry is dedicated to Lord Ganesha.

Promenade- Also known as the Goubert Avenue, the Promenade is one of the best places to visit in Pondicherry. It is designed in a French style, has boulevards and swaying palm trees all around. The seafront is best experienced in the early morning to soak in the breeze and the calmness of nature. The place is also a great hangout in the evenings, thanks to the bustling bazaars.

Pondicherry Museum- The Pondicherry Museum is a hub for history lovers, art enthusiasts and explorers. The museum is known for its rich collection of artifacts on literature, Dravidian culture, French historical anecdotes and other artefacts that reveal facts about the city's history and architecture.

French War Memorial- The French War Memorial is a fitting tribute to the valiant warriors who lost their lives in the World War-I from 1916 to 1919. A major highlight of this Memorial and Pondicherry tourism is the grand Bastille Day celebration on 14th July every year when the monument is all decked up to look its best.

Statue of Dupleix- By virtue of being a former French colony, the union territory of Pondicherry continues to bear traces of its colonial past and the Statue of Dupleix is a testimony to this place's intrinsic French connection.

Statue of Joan of Arc- The erstwhile French colony of Pondicherry abounds in historicity. The historical statues like that of the Statue of Joan of Arc portrays the legendary French lady in her triumphant best as she stands overlooking the picturesque town.

Language- Since Puducherry comprises diverse cultures, there are various languages as well. The majority of the inhabitants speak Dravidian language like Tamil, Telugu and Malayalam. However, even French and English are spoken here and understood as well. Schools here teach in Tamil, Malayalam and Telugu medium along with English and French. But the most widely spoken language is English. The official languages of Puducherry are Tamil, Malayalam, Telugu and French. However, it varies from district to district. English is used in government offices.

Demographics of Pondicherry- Puducherry district has a population of around 1,244,464 according to the census of 2011. The population density is 2,598 per square kilometres. The sex ratio is 1031 females for every 1000 males.

How to Reach Pondicherry- Puducherry also called as Puducherry lies on the Coromandel Coast, located on India's southeastern coastline. The tiny land is a Union Territory. Once a French colony, Pondicherry has a rich past. But today's Puducherry has bagged more fame due to the Auroville Ashram established by Rishi Aurovindo. The spiritual attraction mixes with the undulating waters of the Bay of Bengal and rich cultural heritage to make Pondicherry an enchanting destination.

By Air- Pondicherry has its own Airport which is located at Lawspet. To meet the increasing air travel demand a new terminal was inaugurated on 17 January 2013. This new terminal has scheduled flights to Bangalore and other major cities. Currently Spicejet is the only airline which is operating flights to Puducherry via Bangalore.

By Rail- Pondicherry has its own Railway Station; which is connected by a broad gauge railway line from the five-way junction at Viluppuram and Chennai. There are express trains which connect Puducherry with other neighboring cities and states.

By Road- Pondicherry has a good road network and excellent infrastructure facilities. The union territory has a total road length of 2552 km. The state is well linked with national highway and state highways. The most convenient way to Pondicherry is either from Chennai (150 km) and Bangalore (309 km).