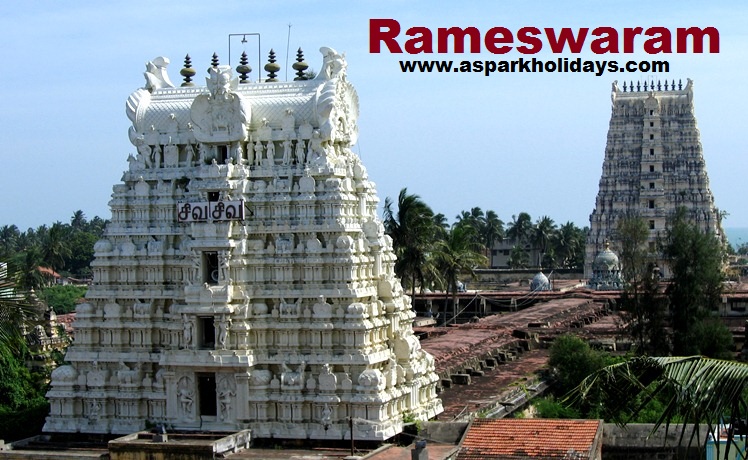 About Rameswaram
Rameswaram (Chennai to Rameswaram 572 km) is a small island in the Gulf of Mannar, is a major pilgrim centre. It is connected to the mainland by road and railway bridges. Rameswaram is a holy place because Sri Rama, on his return from Sri Lanka, offered his thanks to Lord Shiva and performed pooja to wash away his sin in killing the Demon King, Ravana.

Rameswaram is known for its 22 theerthas or wells in and around the main temple. This place is equally sacred to both Vaishnavites and Shaivites. According to Hindu Mythology, if one visits Rameswaram and prays to Lord Shiva one will be relieved of one sins. It is 197 metres long.

Besides pilgrimage, Rameswaram Island has several places, which are ideal picnic spots. There are beautiful beaches at Olaikuda, Dhanushkodi and Pamban. The Olaikuda beach is 1 km from the main temple and s engulfed by coral reefs, which makes bathing in the sea safe and enjoyable. With diving glasses and respiration tubes, scuba diving is safe and possible. Flamingos, sea gulls and a variety of birds migrate to the Rameswaram Island during winter.

Rameswaram is a main fishing centre of Tamil Nadu. Variety of fishes including export quality fish like prawns, sea cucumber, and lobster are available here. Rameswaram is also famous for its dry fish.

Location of Rameswaram- The sacred town of Rameswaram is situated on Pamban Island. The island does not form a portion of the Indian mainland and it is disconnected by the Pamban canal. The distance of the holy town from the Mannar Island in Sri Lanka is approximately 50 km. Another name of Rameswaram Island is Pamban Island and the Pamban Bridge links the island to the Indian Territory. Rameswaram is also the last station on the railway track from Madurai and Chennai. Along with Kashi, Rameswaram is regarded as one of the famous sacred sites in India to the followers of Hindu religion. It constitutes the Char Dham or four most religious places of worship in India. As a result of this, it has turned into a vibrant religious hub.

The town is the birthplace of Dr. A.P.J. Abdul Kalam, former Indian President. He grew up in a tiny fishing village known as Dhanushkodi lying on this island.

The seashores of Rameswaram are known for their picturesque features. The stunning sea is tranquil and almost free of any waves. The sea waves go up to a maximum altitude of 3 cm and the sight appears similar to an extensive river. According to Hindu mythology, Lord Rama of the famous Hindu epic Ramayana offered his prayers to Lord Varuna, the sea god, to build the route to Lanka. Lord Varuna blessed him, offering an approval, stating that he will diminish the intensity of the sea waves in order to help him construct a stone bridge.

Climate of Rameswaram- The town features an arid weather with a considerable extent of humidity. The mean yearly precipitation of the town is 94 cm. The major volume of precipitation results from the Northeast torrential rain which takes place from the month of October to January. The temperature of the area measures between 30°C and 35°C. The maximum temperature registered was 37°C at Pamban station and the minimum temperature ever recorded was 17°C

Ramanathaswamy Temple- The Ramanathaswamy Temple is a renowned place of worship for Hindus, which is devoted to Lord Shiva. It lies on the island of Rameswaram in Tamil Nadu, India. The temple is dedicated to Lord Shiva. The temple is famous for featuring the most extensive corridor in the world. From east to west, the length of the corridor is 197 meters and from south to north, the breadth of the corridor is 133 meters.

The puja procedure at the principal temple can be categorized into the following:

The pujas take place six times a day in the temple.

Dhanushkodi- Danushkodi or Dhanushkodi is the southernmost point of Rameswaram. It lies close to the eastern seashores of Tamil Nadu and is a tiny village. The length of this strip of land is 18 km and it has a width of about one km.

According to Hindu mythology, Lord Rama destroyed the bridge or sethu with one end of his bow when Vibeeshana, the brother of Ravana and his friend, urged him to do so. As a result, the name Dhanushkodi originated. Dhanush stands for bow and Kodi implies end. There is a saying that Lord Rama commemorated this area with one end of his legendary bow.

Popular Festivals in Rameswaram- Rama's reverence is celebrated from June 15 to July 15 in the month of Aani. In addition, two Bhrammotsavams are observed every year in Maasi and in Aadi. Vasanthotsavam, Navarathri Festival or Dussehra, Aarudhira Dharshna, Kantha Sashti, and Mahasivarathri are some other festivals.