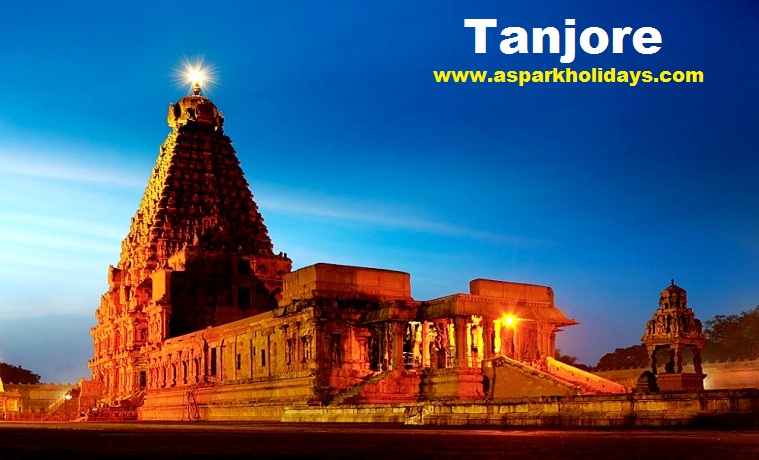 About Tanjore or Tanjavur
Called the rice bowl of the country, Tanjore is an interesting place located in the eastern coast of Tamil Nadu. It was the cultural capital of the state till the period of 1790. It rose in to prominence at the time when it was under the rule of the Cholas and was their capital. Consequently it came in to the hands of the Nayaks and the Marathas with a prominence in its culture and architecture. The Grand Anicut and the Serfoji temple gave ample proof of the earlier extravaganza.

In the present context, it is known for the magnificent temples set in the lush green rice fields of the Cauvery delta. Thanjavur is specially distinguished as a place for the art lovers. The Maharaja of Serfosi in the 19th century himself developed the famous Thanjavur style of painting. The art form is a combination of raised and painted surfaces.

Major Tourist Attractions of Tanjore- Brihadeswara Temple: The Brihadeswara temple lies to the southern part of the city of Tanjavur between the Grand anicut canal and the Vadavar river. Dedicated to Lord Shiva , this magnificent temple was built in 1003 AD by the chola king Rajaraja. The temple, considered among the grandest temples of the Hindu religion is unique to itself. The vimana or the tower over the altar sours into the sky. Popular as the Temples of Temple, the Rajarajesvaram temple display some of the best expressions of artistic excellence of the Chola period.

The temple is an outstanding form of Chola architecture and is the crowning glory of the place of Tanjavur.

There is also to be found an interesting Archaeological Museum which exhibits the ancient ruins and the temples restoration. It also gives a chance to look back in to the history of the Chola Empire. The 107 paragraph long inscription found on the walls of the Vimana reads the contributions of the chola king Rajaraja and his sister Kundavai to the Thanjavur temple

Tanjore Maharaja Serfoji Saraswati Mahal Library:- The Thanjavur Maharaja Serfoji Saraswati Mahal Library exists till today and is one of the mediaeval libraries in the world. A treasure house of Knowledge, it has a repository of Culture that gives a clear picture of the different dynasties that ruled the place. The library contains rare collections of the manuscripts and literature of the Nayakas to the Marathas.

Art Gallery & the Sangeet Mahal (Hall of Music):- The Art and Music Gallery located inside the Palace displays an outstanding collection of 250 Chola Bronze statues and around 150 stone statues that dated back from the 9th to the 12th century.

This Sangeet Mahal or the Hall of Music was constructed by Maharaja Serfoji. It exemplifies the acoustic qualities of the times.

Thanjavur Palace:- The palace is also known as the Great Fort and it was too built by the Nayaks in around 1550AD. Later the Marathas added more significance to it by giving it their style. Inside the fort there is the Palace of king Vujaya Raghava Nayakkar The Fort complex has two towers one of which was used to store weapons and the other used by the king to pay obeisance to Sri Rangaswami.

Nearby Tourist Attractions of Tanjore

Thirukandiyur:- The place is located 10 kms from Thanjavur and the temple of Brahma Sirakandeshwara and Harsaba Vimochana Perumal are situated here. The temples are noted for their fine sculptural work It is also a place of importance for the Hindus living nearby and the tourists do generally visit this place on their tour to Thanjavur.

Visitors to the place of Thanjavur has the choice of electing from a range of different items. The precious ones are Tanjore Paintings, Wood carvings, brass items and antiques The government controlled Poompuhar Handicrafts has a variety of hand made goods to the wonder of the takers.

By Air: The nearest airport is situated at Trichy which is 65-km from Thanjavur. Bus option are available from the airport for the tourists.

By Rail: The railway station at Thanjavur is well connected with Trichy, Chennai, Madurai and Nagore. The temple is situated near to the station.

By Road: Thanjavur is well connected by road with all the major towns and cities in Tamil Nadu and also with Kochi, Ernakulam, and Thiruvananthapuram in Kerala and Bangalore in Karnataka. There are regular bus services for visiting all the places of interest in and around Thanjavur.