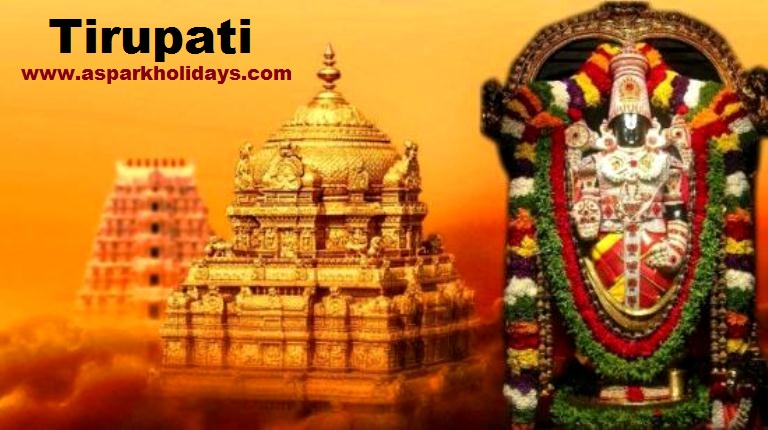 About Tirupati
Tirupati, one of the famous pilgrimage centre is located in the extreme south of Andhra Pradesh. The temple town of Tirupati is situated amidst the thickly-wooded hills in the eastern ghats in the Chittor district of Andhra Pradesh. The Eastern Ghats looks like a snake where Tirumala forms the hood. Tirupati is the town and transport hub at the bottom of the hill. The hill near the temple is known as 'Tirumala' or the sacred hill. The Tirumala Hill is 3200 feet above sea level and comprises of seven peaks that represent the seven hoods of Adishesha. Tirupati means the Lord of Lakshmi and is applied to the village on the Venkat hill. Tirupati is the abode of the Lord Venkateshwara", also known as the Lord of the Seven Hills and Balaji. The Lord Venkateshwara is the 'Kaliyuga' incarnation of Lord Vishnu. Tirupati is the most famous, richest and ancient temple in the South India. Not only, the divine darshan but various attractions provided by nature, serene surroundings and a pro-active administration have made this place the ideal pilgrimage and holiday destination. Telugu and English are the main languages which are spoken in Tirupati. The best time to visit the Tirupati temple is from September to February.

Lord Venkateshwara Temple- The Lord Venkateshwara, also known as Balaji is the incarnation of Lord Vishnu. This temple is situated at the Tirumala Hills and famous all over the world. This temple is visited by millions of pilgrims from all over the world. This temple is mentioned in the ancient texts and was patronized by the Pallavas, Pandyas, Cholas, Vijayanagar rulers and the Maharaja of Mysore. The temple is an excellent example of early Dravidian art and South India temple architecture. The temple is surrounded by mango and sandal trees and stands on top of a 2500-feet peak. In front of it is the Hall of Pillars, an attractive stepped-way that leads to the temple gate. The vimana over the sanctum sanctorum and the Dhwajastambham are gold plated. The devotees follow the elaborate rituals inside the temple. Non-Hindus can not participate in the rituals but can only ascend the temple and see it from the outside.

Sila Thoranam- Sila Thoranam is the natural rock formation situated on the Tirumala Hills. This rock formation is one of the nature's wonders and one of its kind in Asia. It is a naturally-formed arch of rock and these types of rocks can be also seen in the Rainbow Arch at Utah in USA and the Cut Through in UK. The Sila Thoranam is believed to be 1500 years old and formed by weathering and wind erosion. The length of the arch is 25 feet and a height of 110 feet.

Agastyaswamy Temple- The Agastyaswamy Temple lies at the confluence of three rivers which are Swarnamukhi, Bhima and Kalyan. The temple has three beautifully sculptured entrances that heighten the grandeur of the hall inside. a separate shrine for Goddess Parvati is also located within the temple.

Chandragiri- Chandragiri is located close to Tirupati on the banks of the Swarnamukhi river in the Chittoor district. Chandragiri was the last capital of the Vijaynagar kings. The Vijayanagar empire contributed vastly to the Telugu culture, art and literature. The last Vijayanagar king, Ranga Raya, also approved of the sale of the land on which Saint George fort was built in Madras at this place. Today, only there are ruins of the Chandragiri fort and the Raja Mahal and Rani mahal places. The fort is situated on the top of the rock and 56 meters tall.

Kalahasti- Kalahasti is another pilgrimage center, situated about 36 km. east of Tirupati and on the borders of Tamil Nadu. The holy temple attracts thousands of devotees every day, stands on the banks of the river and looks up to the hills of the Eastern Ghats. This temple of Lord Shiva is in the form of a Vayulinga. According to legend, a spider spun a web over the Linga and Kala, a snake placed a gem on the top of it and Hasti, an elephant brought water in its trunk to wash the Linga. All the three of them were ardent worshippers of Shiva. The flame in the temple flickers frequently as air is said to be constantly emanating from the Sivalinga.

Sri Vedanarayana Swamy Temple- Sri Vedanarayana Swamy Temple is believed to have been constructed by the Vijaynagar emperor, Sri Krishna Devaraja on the behalf of his mother. This temple is a fine specimen of the Vijaynagar style of architecture. The sanctum sanctorum houses an image of Lord Vishnu in the form of fish (Matsya) accompanied by the Sri Devi and Bhu Devi on either side. One of the important feature of the temple is the sun worship.

Horsley Hills- Horsley Hills is one of the best known hill resorts of Andhra Pradesh. This place is named after the British Collector of Cuddapah, who discovered the beauty of the area and made it the summer resort. This hill resort is situated about 1265 meters above sea level.

How to Get Here

By Air- Tirupati is connected by direct flights from Hyderabad and Chennai.

By Rail- Tirupati lies on the main railway line from Chennai. Direct railway services are available from Hyderabad, Chennai, Mumbai and Bangalore.

By Road- Tirupati is well connected by road with Bangalore, Chennai, Hyderabad and Vijayawada.