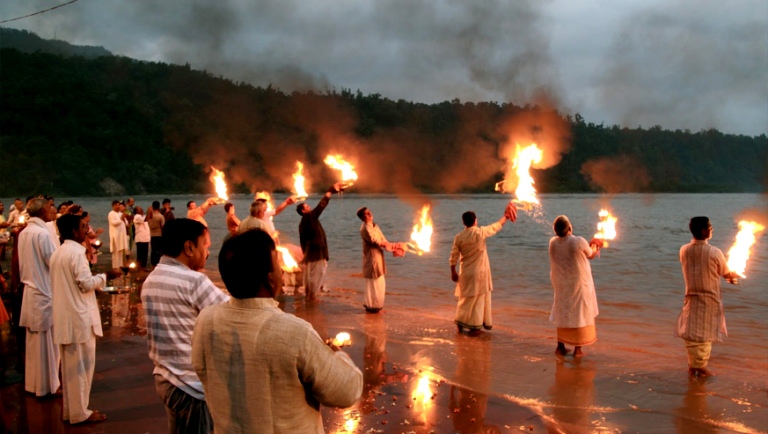 OVERVIEW- Haridwar city positioned in the foothills of the Shivalik, represents the point where the Ganga reaches the plains. It is famous for being blessed by trinity of Lord Shiva, Vishnu, and Brahma. he name Haridwar (Hardwar) has been derived from two words, 'Har' means Shiva, 'Hari' means Vishnu, and Dwar means gate. Haridwar is thus the gateway to the two holy shrines of Shiva and Vishnu in Badrinath and Kedarnath, respectively. Rishikesh is virtually a town of saints, sages and scholars. Rishikesh is a rare religious center located on the right bank of river Ganga. There are a number of Ashrams where religious discourses are held. The place is also a renowned center for yoga teachings. Rishikesh is also an attraction for foreign pilgrims who want to know about Hinduism and who want to spend some time close to the Lord.

HARIDWAR- Haridwar is one of the seven holy cities of the Hindus that are also known as Moksapuri or Sapta-Puri. Literally means the gateway to Hari, an epithet for Vishnu, the Creator in the Hindu Trinity of Creator-Preserver-Destroyer. It is also called Gangadwara, because it is near Haridwar that the Ganga, the most sacred river of the Hindus, enters the Great Plains.

RISHIKESH- It is a peaceful town and is also one of the holiest towns of India. There is a mystical air about the place. A famous centre for yoga (mystical and spiritual training) and meditation, the town is dotted with numerous ashrams which offer yoga and meditation courses.

Drive to the City of Ganges-Haridwar.

HAR KI PAURI- According to the Hindu mythology, it is at Har ki Pauri in Haridwar that king Bhagirath performed a penance to Lord Shiva in order to rescue souls of his ancestors from vicious circle of rebirth. Pleased with his prayers, Lord Shiva asked holy river Ganga to flow through his locks. Bhagirath took a dip in the holy waters of river Ganga and rescued the souls of his ancestors from their sins. Since then, thousands of devotees take a dip at Har ki Pauri to pray for salvation of their ancestors.

MANSA DEVI TEMPLE- The temple is perched on a hill top and can be reached through a cable car ride. It is believed that Goddess Mansa fulfils the wishes of her devotee, so, lots of pilgrims flock to the temple to have their wishes fulfilled from the Goddess.

CHANDI DEVI TEMPLE- The temple is dedicated to Goddess Chandika Devi and is considered to be one of the Siddha peethas of Haridwar where the wishes of true devotees get fulfilled.

In the evening drive to Rishikesh. Later transfer to the hotel. Day free for leisure.

NEELKANTH MAHADEV TEMPLE- The temple is dedicated to Lord Shiva who is revered here in the form of Neelkanth. As per puranic legends, it is at this place where Lord Shiva consumed the poison that originated from Samudra Manthan. The poison turned his throat (kanth) blue (neel) and hence the name Neelkanth.

BHARAT MANDIR- The temple is situated in the heart of the township of Rishikesh. Said to be the oldest temple in Rishikesh, it is also regarded as one of the most ancient shrines in India.

LAXMAN JHULA- Lakshman Jhula, the famous hanging bridge across Ganga, is about 3 km from the main township of Rishikesh. As per mythological tales, once Lakshman, the younger brother of Lord Rama, crossed river Ganga at the same site where the bridge now stands.

PARMARTH ASHRAM- Founded in 1942 by Pujya Swami Shukdevanand Ji Maharaj, Parmarth Niketan is an ashram located in Rishikesh. It's the largest ashram in Rishikesh with over a thousand rooms. Parmarth Niketan provides its thousands of pilgrims a clean, pure and sacred atmosphere as well as abundant, beautiful gardens.

Later you can choose any activity

YOGA- Yoga is an invaluable source of knowledge, endurance, spirituality and fitness. It brings across the perfect blend of spiritual intelligence and physical fitness in a person's life. This ancient Indian art finds its origin in the Patanjali Shastra. Rishikesh, a holy destination in Uttarakhand, has been an important center of Yoga learning for long.

ADVENTURE SPORTS- Topography of Rishikesh is blessed with turbulent rivers, getting their energy from various rivulets and tributaries from the glaciers above. These rivers and their nearby areas make excellent spots for adventure sports like White Water Rafting, Canoeing, Trekking, Rock-Climbing / Mountaineering, Camping and Skiing (especially in winters).

Later in the evening travel back to Delhi to catch your flight/train towards onward destination.

Uttarakhand at a Glance

Haridwar at a Glance

Rishikesh at a Glance