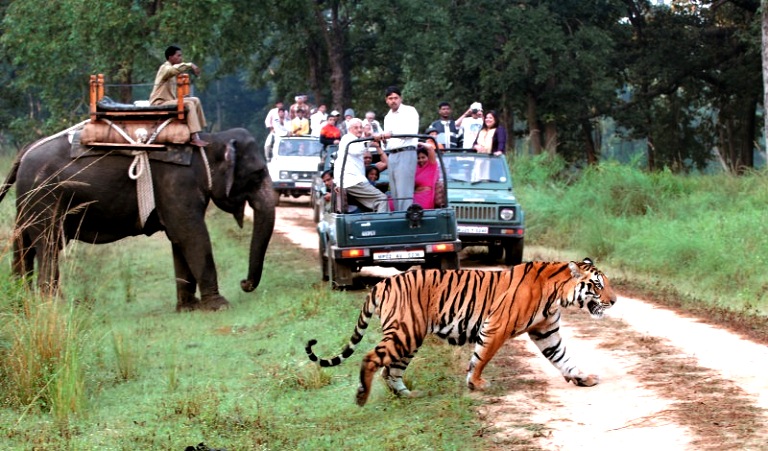 OVERVIEW- India has been blessed with a vast variety of wildlife, including mammals, birds, reptiles, insects etc. To protect the animal species, there are numerous wildlife sanctuaries and national parks, which are tourist attractions as well. Ranthambore & Jim Corbett Tour offers you a chance to explore the diverse wildlife of India. During the tour, you visit the well-known wildlife reserves of the county such as Corbett National Park and Ranthambore National Park along with the famous historical and tourist places of the capital Delhi, rich heritage sites of Agra and royal palaces and forts of Jaipur.

CORBETT- The Park is one of the favorite tourist spots of people from all over India and even to people from across the world. Located at the foothills of the Himalayas, this wonderful sanctuary is home to some exotic variety of ferocious cats like the tiger and the leopard.

Please Note: This is just a suggested itinerary indicative of what could be possible. We tailor wildlife holidays for your specific needs. Contact us if you want modifications so that we could tailor a holiday to suit your need for an unforgettable India tour.

Arrive in Delhi and later transfer to the hotel. After freshen up, enjoy full day city tour of Old Delhi & New Delhi visiting

PRESIDEN'S HOUSE- New Delhi, centers around the Rashtrapati Bhawan. It is architecturally a very impressive building standing at a height, flowing down as it were to India Gate.

Early morning drive to the Tiger Reserve-Corbett National Park. Transfer to the hotel.

Later in the afternoon go for a nature walk accompanied by a naturalist, along the Kosi River. This area is a birders' paradise. A slide show on the flora & fauna of the area.

After breakfast enjoy the beauty of the Jim Corbett National Park in a jeep safari searching for tigers or a herd of elephants.

WILDLIFE VIEWING: Chital, Sambar, and various other Deer species find refuge in the Savannah grasslands known as the Maidan, behind the campsite to the south. And Tigers are occasionally drawn in looking for prey. Two-hour elephant rides, explore this sea of grass, rarely penetrating far into the deep jungles beyond; try to convince your Mahout or Elephant driver to venture in, as they can be quite magical. Come at dusk or dawn; in the heat of the day you probably won't come across much more than deer among the tall grass. Tiger-sightings are few and far between, but you may be rewarded with fresh pug marks.

Drive towards The Land of culture and heritage - Agra. Transfer to hotel, and after lunch visit

Check-Out from the hotel, and drive towards Jaipur- the pristine jewel in the desert sands of Rajasthan. Enroute visiting Fatehpur Sikri

FATHEPUR SIKRI- Once the capital of the Mughal emperor Akbar, a deserted, red sandstone city built by the Mughal Emperor Akbar in the 16th century. Further continue your drive towards Ranthambore- the largest national park of Rajasthan. Transfer to hotel and evening time to relax.

RANTHAMBORE FORT & JOGI MAHAL- The park got its name from the Ranthambore Fort, which sits on a rocky outcrop in the heart of the Park. The fort, which dates back to the 10th century and is probably the oldest existing fort in Rajasthan, was a vital citadel for control of Central India and particularly the Malwa plateau. The entry point to the Ranthambore National Park goes straight to the foot of the fort and the forest rest house, JogiMahal. Also it has the second-largest Banyan tree in India.

AMER PALACE- A beautiful complex of palaces, halls, pavilions, gardens and temples built by Raja Man Singh. Tourists often ride on the elephant back to the Singh pool and the Jaleb Chowk.

After breakfast, later travel back to Delhi to catch your flight/train towards onward destination.

Corbett at a Glance