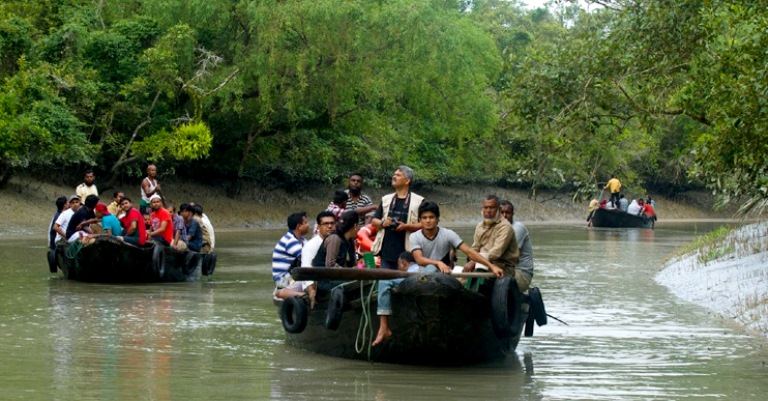 OVERVIEW- Kolkata is known as City of Joy and is one of the largest metropolises of the world. Apart from being the capital of West Bengal, it is also principal commercial, cultural and educational centre of East India. Sundarbans National Park is located at the South Eastern tip of the 24 Paraganas district in the state of West Bengal. It got its name from one of the mangrove plants known as Sundari (Heritiera Minor). The Sundarbans are a part of the world's largest delta formed by the rivers Ganges, Brahmaputra and Meghna. Sundarbans Wildlife Tour brings the sightseeing of both these beautiful places Kolkata & Sundarbans.

KOLKATA- Kolkata, aptly known as the City of Joy, is one of the vibrant cities of India. The city reflects a mash-up of ancient and spiritual India and the European Era. Often Kolkata is regarded as Intellectual and Cultural Capital of India. As one of important seats of the British rule, it consists of several British monuments. Kolkata mirrors warmth, culture, creativity, intellectualism and artistic development considering that Kolkata is the home to four best Nobel laureates - Rabindranath Tagore, Ronald Ross, Mother Teresa and Amartya Sen.

SUNDERBANS- The Sundarbans is a cluster of low-lying islands in the Bay of Bengal, spread across India and Bangladesh, famous for its unique mangrove forests. This active delta region is among the largest in the world. The large mangrove forests of Sundarbans are interwoven by numerous tributaries, making it one of the most attractive places remaining on earth.

Please Note: This is just a suggested itinerary indicative of what could be possible. We tailor wildlife holidays for your specific needs. Contact us if you want modifications so that we could tailor a holiday to suit your need for an unforgettable India tour.

Welcome to the City of Joy- Kolkata. Transfer to the hotel. Later, full day city tour of Kolkata

VICTORIA MEMORIAL- Another symbol of the British Raj in India, the Victoria Memorial is located in the heart of Kolkata, India. This white marbled beauty, which can rightly be called the epitome of grace and elegance, was built in memory of Queen Victoria to celebrate her 25 years of rule over India. The intricate memorial not only bears testimony to the British rule in India but also stands out as an example of refined and excellent architecture in the Indo-Saracenic revivalist style that existed in that era.

FORT WILLIAM- The mighty edifice of Fort William is situated on the eastern bank of the  Hooghly River. Built in the year 1696, the fort gets its name from King William III and was the first stronghold of the British in the country. The imposing structure of Fort William is embellished with hundreds of archlike windows and overlooks lush green gardens.

HOWRAH BRIDGE- The iconic landmark of Kolkata, Howrah Bridge is a massive steel structure which is considered as one of the longest cantilever bridges of its type in the world. Also called as Rabindra Setu, it extends across the Hooghly River and connects Howrah and Kolkata. It is also regarded as one of the busiest ones among them as it carries a daily traffic of over 100,000 vehicles and countless pedestrians.

INDIAN MUSEUM- The ninth oldest museum of the world and largest in India, the Indian Museum is located in the old city of Kolkata. The foundation stone of the Indian Museum was laid down in the year 1814 it exhibits some of the finest collection of historical importance ranging from contemporary paintings and a sacred relic of Buddha to Egyptian mummies and ancient sculptures.

MARBLE PALACE- The Marble palace near the Chorbagan in North Kolkata built in 1835 by Rajendra Mallick is famed for its art collection of masterpieces by Reuben and paintings by various renowned international artists such as Reynolds, Van Gogh and Rembrandt.

DAKSHINESHWAR KALI TEMPLE- The temple resides in the heart of every single Bengali and is highly revered for being the sanctum sanctorum of Goddess Kali along with the place-of-stay of one of the greatest mystics and yogis of all times, Ramkrishna Paramhansa and his consort and spiritual companion, Maa Sarada Devi.

KALIGHAT TEMPLE- Kalighat Kali Temple is considered as one of the 52 Shakti Peethas. Kalighat is said to be the site where the toes of the right foot of Sati fell. In earlier years, the image of the deity was incomplete as only the face was constructed.

BIRLA MANDIR- Birla Temple is a glowing structure that adorns the streets of Kolkata and is a shrine dedicated to Lord Krishna and Goddess Radha. An imposing structure amalgamating traditional style of architecture with modern reflections, the temple is the perfect specimen of craftsmanship and engineering genius.

BELUR MATH- Sprawling over forty acres of land on the west bank of the Hooghly River, Belur Math is a place of pilgrimage and also the headquarters of the Ramakrishna Math and Mission. People from all over the world, irrespective of the religion that they believe in, visit this temple to enjoy the tranquillity and serenity that it imbues.

EDEN GARDENS- The Eden Gardens is a beautiful, well- maintained garden and second largest cricket stadium located in Kolkata's B. B. D. Bagh area, near State Secretariat and Calcutta High Court. It was established in the year 1864 and was laid by Governor- General Auckland, who named them after his sisters Emily and Fanny Eden.

PARK STREET- Also called Food Street and the Street that never sleeps by the locals due to the various restaurants and pubs located in the area. The place was one of the top night life spots during the 70's and the 80's.

In the afternoon watch endemic and migratory birds and wildlife while you cruise through the creeks and canals of the Sunderban Tiger Reserve forest to Sajnekhali Watchtower and Mangrove Interpretation Centre. As the sun sets in the distant horizon return to the resort.

In the morning board a thrilling cruise towards Dobanke Watch Tower and move into the Sundarban Tiger Reserve Forest through creeks and dense forest and numerous rivers. The canopy walk at Dobanke Watch Tower inside the forest sends chills down your spine (experience the life in which caged animals live in, while getting a 360° view of the forest). Visit the spotted deer rehabilitation centre after which cruise back through Matla Sea Face (the point from where Bay of Bengal can be seen) to Sundarban Tiger Camp. In the afternoon experience the true Sundarban, walking through the native village of Dayapur. Encounter wonderful sights and learn about the lifestyle, local crafts, cuisines, and way of life of the local villagers. Observe indigenous farming methods and how their houses are completely mud made with small entrances. Pass through the village market and later return to the resort.

Head for the morning cruise into the Sunderban Tiger Reserve once again through creeks and rivers heading to the Sudhanyakhali Watchtower. Walk through the caged walkways after disembarking towards the watchtower, searching for the elusive tiger. Later cruise back to Sunderbans Tiger Camp.

In the afternoon, depart to Kolkata to catch your flight/train towards onward destination.

Kolkata at a Glance

Sundarbans at a Glance